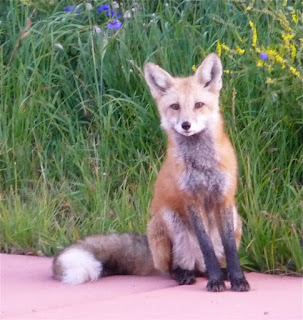 After whining this morning about the plight of my life (let's see, I'm in Aspen, staying in a lovely hotel room with free internet, a warm comfortable bed, hot shower and a deck overlooking the mountains ... perhaps I need a dose of reality?!) ... anyway, after doing all that whining and navel-gazing I went out to see the balloons launch and immediately met a pair of red fox who played and posed and treated me as if I were just another fellow traveler on their path.

And, then to the balloon grounds where I watched the most spectacularly stunning, jaw-droppingly incredible display of color and form I've ever seen. About 25-balloons slowly and gracefully inflated and drifted toward the perfect azure sky. My camera and I were in ecstasy ... at least until it started to lose its battery juice. 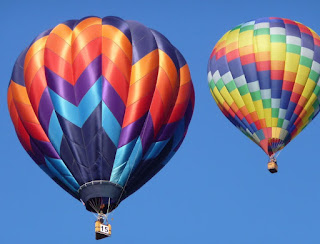 I forgot that I was alone as I absorbed the shimmering color around me. Slowly, it dawned on me that perhaps the only antidote to pain is joy and, more importantly, joy is always available to us. We just have to look around us and see what calls to us. But, it does mean (I say to myself) somehow turning down the volume of the whining long enough to hear the quiet murmur of what we love, what brings us joy, what pulls us into connection with our spirit and makes us no longer feel alone and disconnected.

Maybe it's the turning down the volume of the whining that is the biggest challenge?

Back to google: whine (hwn, wn)
v. whined, whin·ing, whines
v.intr.1. To utter a plaintive, high-pitched, protracted sound, as in pain, fear, supplication, or complaint.
2. To complain or protest in a childish fashion.
3. To produce a sustained noise of relatively high pitch: jet engines whining.

Childish. That leads me to parenting a whining child ... only I'm reading "my whining inner child."

Whining is a habit your child developed over time, and it will take a little time to break it. But, don't despair; you can stop your child's whining habit. Here's how.

1. Notice when she whines and choose your response. Changing the pattern of whining begins when you change how you respond to it.

2. When you notice her whining, call her attention to it. Whining has become an unconscious habit by the time she reaches elementary school. She needs to learn to recognize it first. Some strategies you can try are:
* Purposeful ignoring. You can even say "I'm ignoring you when you use your whiny voice. Try again in your normal voice and I'll pay attention."
* Whine back. Use a bit of humor to cue her to notice her whining by showing what a whiny voice sounds like.
* Stop her immediately when she whines and say, "Do you hear that you are whining? Tell me the same thing in your normal voice."

3. Tone of voice is the hallmark of whining, but the child's reaction to being told 'no' is another component of whining. She needs to learn a new habit to replace whining, so help her learn the right approach to asking for what she wants. Asking politely is an important social skill that you can teach directly. To teach a child to accept 'no' for an answer can be more of a challenge. I like the approach from Common-Sense Parenting. Teach your child to:
* Stop and look at Mom or Dad
* Say "OK"
* Stay calm. Do not argue or whine.
* If you disagree, discuss it later, calmly and in private

4. Reinforce non-whining. Focus on the problem for 2-3 months, and thereafter if the habit creeps back. Notice when she asks politely and when she accepts 'no' for an answer without whining. Praise and reward her to reinforce the new learning. When she does whine, pause, look at her, and call attention to the whining if necessary. Help her think through what she should say and how to practice the new learning. Watch your own whining too, so that social learning doesn't overcome your efforts to break your child's whining habit.

Summary: Notice when I'm whining and have a plan. Call attention to it and stop immediately. Learn a new habit ... breathe, acknowledge it and replace it with a gratitude or a joy. Acknowledge the joy rather than indulge in the whining.
Posted by Joyce Wycoff at 8:26 AM