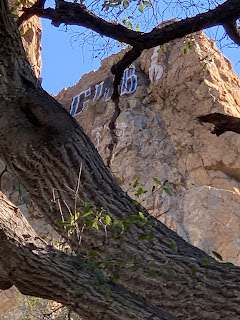 Something deep within us must cry out to be seen, to leave our mark.  Early ancestors left  impressions of their hands and stylized horses on cave walls or pecked symbols onto rocky outcrops. They might have been ceremonial symbols to the gods, recordings of important dreams, or communication to others. However, whatever the meaning of the graphics left behind, it is clear they were important to those early makers. Today we view those marks with a sense of awe and connection to history. We value and protect them.

Yesterday, I saw the other side of that impulse to say, “I was here.”

Minutes beyond the northeastern urban sprawl of Los Angeles, a ribbon of road slithers through a deeply shaded canyon as it enters the Angeles National Forest and the San Gabriel Mountains. After driving through the dark of morning from a different mountain range under a luscious Worm Moon (so named by the Indians because worm trails would begin to appear on the newly thawed ground),  I was nearing Bouquet Canyon Falls where I would meet Joe Lopez.

Joe posted on the California Native Plant Society Facebook page about a project he was doing with a group of people to rehabilitate an abandoned campground into a sanctuary for monarch butterflies. The idea fascinated me and I asked for more information. Joe said, “We’ll be there Saturday, come on over.” Without thinking much about the four-hour drive, I said yes.

Arriving a few minutes early, I walked along the road that had serviced the campground, passed a central stone circle, and continued toward the rocks and the falls. Joe had talked about how much the group had worked cleaning up trash and graffiti. Indeed, the trash cans were overflowing. 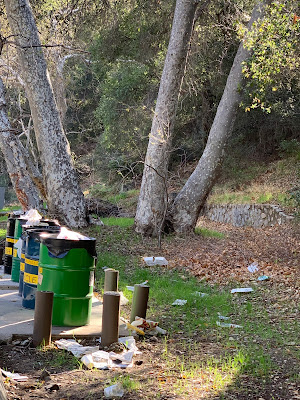 Four young hikers were climbing over the rocks when I saw the graffiti; it was everywhere. Spinning around, I gaped and then felt myself split. 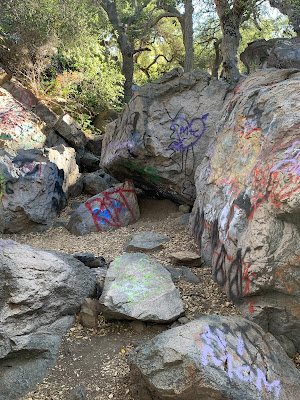 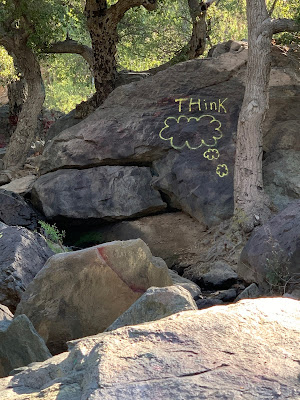 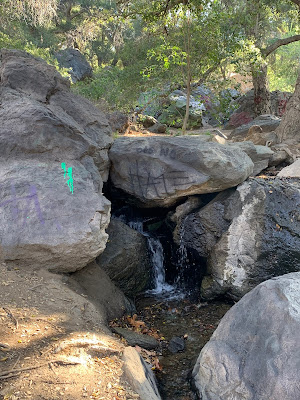 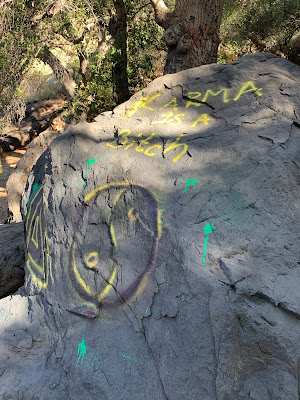 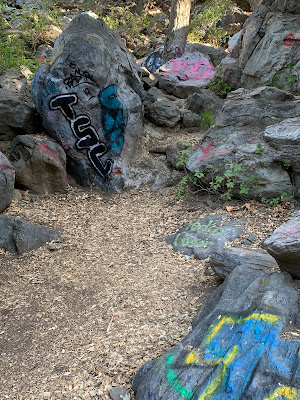 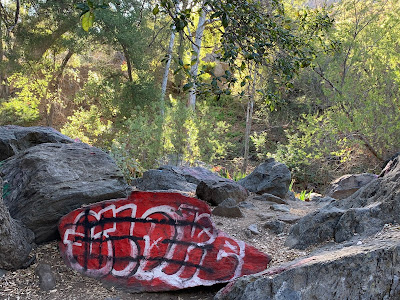 I wanted this beautiful place to be pristine. White sycamores danced against the clear blue morning sky alongside cottonwoods, a perfectly shaped redwood, pines, and two, tall, spindly eucalyptus, not all that happily planted in the circle of the campground-that-was; all shading a trickling creek tumbling over erratic boulders. What a peaceful paradise, or would have been. I felt heartsick.

At the same time, the paint colors also grabbed me, and some of the writing was charming and done with effort and effect. I could feel my mind flipping back and forth between being horrified and being enchanted.

When Joe arrived, we talked about how this project began. Even though he had lived in the area for 35 years, he had never been to the falls until he heard a woman, who had visited the falls often as a child, talk about how trashy and graffitied it had become. In 2017, Joe visited the falls and happened to meet Dan Chapman there at the same time. They decided to do something and began cleaning out trash, removing graffiti, and gradually attracting other helpers and donations.

Bouquet Canyon Falls campground was a popular place that was renovated in the 1970s. However, with the Forest Service budget cutbacks in the 1980s, maintenance budget dried up and the campground began to deteriorate. Proximity to urban populations attracted vandalism and crime which led to abandonment by the public and eventually to closure by the Forest Service. Today, there are few open campgrounds in this area. 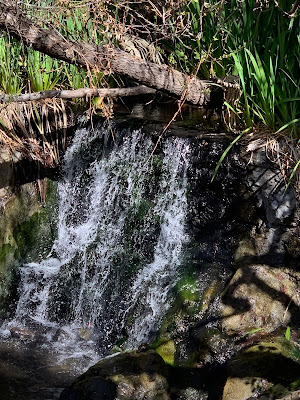 Nature still calls people to the falls for a variety of reasons. In addition to hikers, photographers, and picnickers, recently a spiritual group has been coming regularly to perform what has been described as a cleansing ceremony. Unfortunately, their ceremony includes leaving quantities of fruit to rot in the pool at the base of the falls. Although, seldom seen, a myriad of young graffiti artists (a presumption of youth comes from the difficulty of getting to many of the places which have been graffitied) layer color on top of color the group has recently removed.

Lopez points out how much trash and graffiti has already been removed and explains that the environmentally safe paint remover they use costs $300 for five-gallons and they can go through that in a day. The group has been gifted with equipment and materials and Lopez has created a non-profit organizations so others can help by donating to the project. While they are far from finished with the graffiti removal, they have reached a point where people can enjoy the falls and they are ready to start planting butterfly-friendly plants to give Monarchs a place to lay their eggs and hatch them before the winter migration to their coastal habitats.

I honor and commend this group’s great work to reclaim this area of natural beauty; however, I am left with many unanswered questions:

We write; we make art; we spray graffiti.
We make marks that tell the world we were here.

What is the honorable way to be in nature?

Who judges what is good and what is not?
What determines historical value,
spiritual significance, or the definition of beauty?

Who does this land belong to? (A different question than Who owns it?)

What does it mean to protect our public ... our sacred ... lands?

The GoFundMe page for this project is Bouquet Canyon Falls Cleanup if you would like to help. 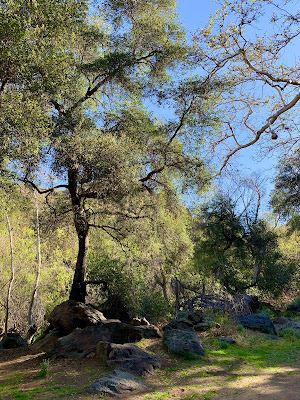 Addendum: The name for Bouquet Canyon began in a slightly more mundane manner. A French sailor nicknamed, "El Buque," Spanish for "The Ship,"established a ranch in the 1840s named, "Rancho del Buque" and since then the misinterpreted version of his nickname just stuck.