Love Letter #33: Learning from art how to pay attention 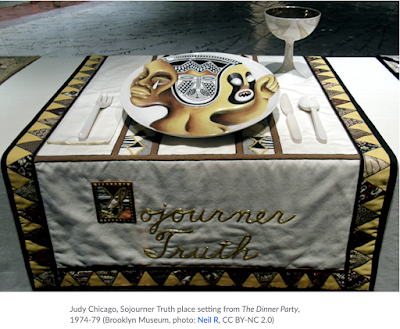 In March, 1979, according to a publicist covering the exhibition of Judy Chicago’s "Dinner Party” in San Francisco, I was living in a cave.

And, perhaps I was. I didn’t know anything about the fanfare surrounding the artist’s electrifying tribute to 39 women who had changed western civilization … and whom had then been promptly forgotten. I didn’t know about the hundred thousand people who would view this work or about the 400 people who had worked for five years to complete it. Hell, I had never even heard of Judy Chicago and could barely spell art.

Making the cave analogy even more appropriate was the fact that I had no clue my world would flip upside down three weeks later when seventeen synchronicities danced a conga line through a weird night and then, with a flourish, announced the end of the marriage I thought would last forever. The lesson I learned then and have continued to learn, mostly, thankfully, with slightly less dramatic effects, was that I apparently wasn’t paying attention.

Since then, I’ve been trying to wake up to myself and the world around me which, apparently, I slept through for years. Sometime after that life tsunami, art came for a visit and decided to stay. The first thing I did after my marriage ended, when some people might get their hair restyled or buy a new wardrobe, I bought my first piece of art and began a slow awakening through art into the larger world.

Recently my two teenage granddaughters began to think about being artists. To support their explorations, I decided to research women artists and maybe make a small book for them about what I found. I’ve often fallen in love with women artists, but Judy Chicago was just a name until I found an out-of-print copy of her memoir Beyond the Flower, The Autobiography of a Feminist Artist. It was interesting enough until I got to the “Dinner Party” when it blew me away with the scope and sheer audacity of her work as well as the history of women largely forgotten or devalued.

Judy’s daring and courage to use “women’s art” forms (ceramics, embroidery, china painting) to tell the history of women makes my heart pound. Among the many things I've slept through was the women’s movement. I resisted the word “feminist,” never burned a bra, nor took assertiveness training or had a child. When I began to make art, genitalia was never a part of it. I think I tried to create a gender-neutral bubble in a highly gendered Universe. I thought I was being successful when, actually, I was living a Swiss-cheese life. Once again, I wasn’t paying attention.

Since returning from my two years in Mexico, I’ve been trying to understand more fully why I came back and, even, why I went. I loved my time in Mexico; however, in some ways, it was a continuation of not paying attention. Central Mexico is a colorful kaleidoscope of sights, sounds, and new experiences, captivating and distracting. It was easy to limit my attention to the outside world I could see and touch, without paying attention to my inner world or the deep river of culture, deprivation, generosity, and oppression running beneath the surface.

My return to the US, as well as the pandemic, slowed me down and gave me time to focus on priorities for the increasingly limited number of years stretching before me.

What emerged was a deep desire to truly connect with the body of nature, including my own physical, mental, and spiritual self. I want to pay attention to the beauty, and the pain, of the earth and feel the interweaving of myself with everything. I want to understand how the oak leaves breathing in what I breathe out and I are both part of this great cycle of life and how the sunshine that seems to be just a pleasant breaking of the long night actually feeds us both.

Recently, I’ve been reading and listening to Ellen Langer, PhD, thanks to the abundance of books, podcasts, TEDtalks, and YouTube videos available. Dr. Langer is is the first female tenured professor of psychology at Harvard University and focuses on mindfulness, which she disconnects from meditation. In other words, paying attention. Sounds simple, however, it’s a mindset, a practice, and never as simple as it seems. One of her quotes I particularly love is:

I want to know I’m here and, as much as possible, value the world surrounding me and the world within by paying attention. Art is a process of paying attention; for me, it begins with photography and continues through the addition of other elements and playing the colors and shapes until they reveal something new, something not noticed before. When that comes, I feel like I have been touched by grace. Discovering the delicate beauty of "Mountain Mahogany" gave me that feeling of connection. 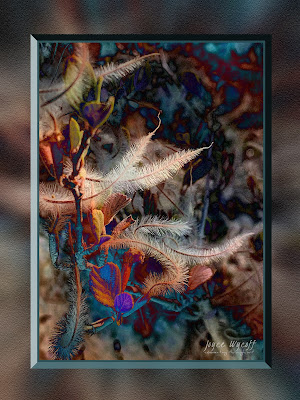 Judy Chicago’s “The Dinner Party,” widely regarded as the first epic feminist artwork, was donated by the  Elizabeth A. Sackler Foundation to the Brooklyn Museum, where it is now permanently housed.
Excellent article and more photos: “Judy Chicago, The Dinner Party” by Dr. Jennie Klein.