Entangled Life, or whose body is this anyway? 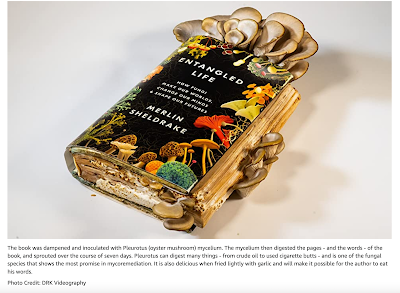 “Sheldrake awakens the reader to a shapeshifting, mind-altering, animate world that not only surrounds us but intimately involves us as well. A joyful exploration of the most overlooked and enigmatic kingdom of life, and one that expanded my appreciation of what it means to be alive.”—Peter Brannen, author of The Ends of the World

Imagine walking through a landscape of two-story tall mushrooms.

Jurassic Park? No, these giants appeared some 400 million years before the dinosaurs stomped about. Long before back-boned animals waded out of the water, while the tallest plants were barely as tall as yard-sticks. But this giant, whose fossilized remains have now been declared a fungus, was only the first of this kingdom to amaze us. 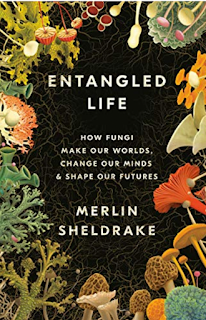 As if he were as powerful as his name-sake wizard, Merlin Sheldrake weaves a story that spins my head, setting off identity alarms with no known off switch. We are not a body, not a carefully evolved big-brained species known as Homo Sapiens. We are an upright-walking ecology of animal, bacteria, fungi, and who knows what else we’re going to find lurking in our inner world.

As an under-educated wanderer setting out to explore the wonders of nature, I had little comprehension of the depth of my ignorance. Picking up a book about fungi with an engaging cover, I thought: mushrooms, simple little things growing in the dark woods … colorful and fun to photograph. It wasn’t long before I fell into an endless spiral of complexity rivaling Alice’s journey into Wonderland.

When I first learned about the tree of life, everything was either plant or animal. All too soon it got more complicated, branching forever away from that either/or pattern. Microscopes opened up the unseen world, and Domains and Kingdoms danced around in circles, baffling those of us who thought we had a firm grip on what life was. All those unseeable thingys were just waiting to demand their rightful place in the family.

By 1969, the whirling about settled into a 5 Kingdom certainty, but only after two mysteriously obscure Empires were invented. See 5 Kingdom below.

Unfortunately, for the average person trying to make sense of the world, this certainty lasted less than a decade before it became the 6 Kingdom proclamation. See 6 Kingdom below.

Faster than an eye-blink, that morphed into an 8 Kingdom movement and then the new 6 Kingdom model which lasted less time than its ancestors before the 7 Kingdoms became the final word … at least until the next word came along and basically scrapped Empires, demoted Kingdoms, and settled on 3 Domains. See 3 Domains below.

Focusing on just the Eukaryota … those of us with nuclei in our cells … gives us plants, animals, fungi, slime molds and a bunch of other relatives whose names offer few clues about who they are.

I have zero confidence that this dance is over or that I will ever know exactly who is traveling with me in the body I thought was mine.

Note: A simplified version of this article will be part of The Granary Tree, Vol 3, a quarterly report on wandering through a world of wonders. Annual subscription: $55 via PayPal (jwycoff@me.com) or check - Joyce Wycoff, Box 292, Julian, CA 92036.