Book Review: Democracy in Chains, The deep history of the radical right’s stealth plan for America 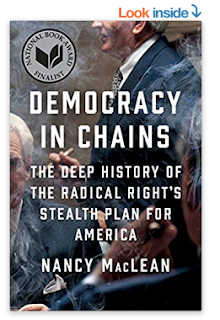 by Joyce Wycoff
Nancy MacLean is the award-winning author of Behind the Mask of Chivalry (a New York Times “noteworthy” book of the year) and Freedom is not Enough, which was called by the Chicago Tribune “contemporary history at its best.” The William H. Chafe Professor of History and Pubic Policy at Duke University, she lives in North Carolina, a once moderate state now radically changed.

Introduction:
(This is a well-written, important book that deserves to be read in full. This synopsis is offered for those who may not have the time or inclination to read the entire book. Any errors in interpretation are my own. JW)

Not quite a hundred years after the Civil War ended, a second civil war began in 1955. I was ten years old and didn’t notice it. Actually, almost no one noticed. There were no brothers fighting on opposite sides of battle fields, no cannons, no bloody uniforms.
Instead, it was sparked by a Supreme Court action and launched in a quiet office of a respected southern university, when a young economics professor, requested funding for a new project and it was granted by the university president who had already answered for himself the question that would fuel the new war: which is more important - private property or public good?

The original players in this story are:
The second civil war began and continues to be fought in stealth, underground, watered by massive amounts of money and organized and dedicated efforts following a carefully constructed plan. It took decades before people started looking around wondering what was happening.
When I first read an article about this book by Nancy MacLean, it was like the curtain parted, revealing the wizard … only it wasn’t a small man with a lot of technology … it was a megalithic, insatiable, Hydra-headed monster  with “property rights” tattooed across each head. 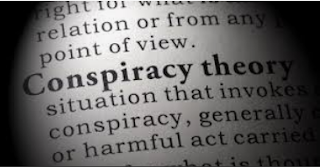 It sounds like a comic tale, or the worst of conspiracy theories, but it’s the all-too-true story of US politics over the past sixty years, uncovered by a historian who stumbled upon the pieces and assembled them into a picture that revealed a terrifying assault on our democratic principles.

It wasn’t until 2010, the author states, that we began to notice troubling actions that seemed to arise with unusual vehemence in unexpected places ...
This book, according to the author, is the true origin story of today’s well-heeled radical right following a plan formulated by James McGill Buchanan with the specific objective of rewriting the rules of the game in a way that would elevate property rights over any idea of “public good.”

The author’s involvement with this project involved a lot of synchronicities, including finding Buchanan’s archives in an untended state after his death. Slowly, she unraveled the linkage between Buchanan and Charles Koch. “What became clear is that by the late 1990s, Koch had concluded that he’d finally found the set of ideas he had been seeking for at least a quarter century by then —ideas so groundbreaking, so thoroughly thought out, so rigorously tight, that once put into operation, they could secure the transformation in American government he wanted … to save capitalism from democracy — permanently.”

Both Buchanan and Koch recognized the importance of stealth.

"Since we are greatly outnumbered," Koch conceded to the assembled team, the movement could not win simply by persuasion. Instead, the cause’s insiders had to use their knowledge of the “rules of the game” — that game being how modern democratic governance works — “to create winning strategies.” A brilliant engineer with three degrees from MIT, Koch warned, “The failure to use our superior technology ensures failure.” Translation: the American people would not support their plans, so to win they had to work behind the scenes, using a covert strategy instead of open declaration of what they really wanted.

What animated Buchanan was his vision of the past when men were unrestricted in their efforts to create wealth and the current state where the government felt entitled to force individuals with wealth to pay for a growing number of public goods and social programs they had no personal say in approving.

"To Buchanan, what others described as taxation to advance social justice or the common good was nothing more than a modern version of mob attempt to take by force what the takers had no moral right to: the fruits of another person’s efforts. In his mind, to protect wealth was to protect the individual against a form of legally sanctioned gangsterism.”

Buchanan identified the main source of the problem as all collective actions intended to change public policy: social movements, labor unions, groups wanting fairness and equality. The justice of their cause did not move him. As a collective, they had power to vote out politicians who did not respond to their needs. He felt this was unfair and unAmerican. He called it "coercion of the minority and a violation of the liberty of individual taxpayers. A form of government corruption.”

“His study of how government officials make decisions became “public choice economics”; his analysis of how the rules of government might be altered so officials could not act on the will of majority became “constitutional economics.” The enemy became “the collective order,” a code phrase for organized social and political groups that looked to government."

Buchanan was disappointed in the implementation of his theory as presidents such as Nixon continued to expand government, the opposite of what he intended. Then Charles Koch stepped in with his "unrealized dream of liberty, of a capitalism all but free of governmental interference."

Koch formed the Libertarian Party to run against Reagan in 1980 and failed, sending him on a journey to figure out how to change the rules of politics. He wanted to find constitutional ways to shackle pubic officials so they would not be able to respond to the will of the majorities. These shackles had to be binding and permanent.  He wanted a "constitutional revolution."

Koch knew his cause was radical; knew that he was not a "conservative." He deliberately learned from Vladimir Lenin how to form a revolutionary organization. He also knew he need a following larger than the few dedicated libertarians, so he camouflaged some of his more radical intentions in order to be accepted by the conservatives.

This same motivation made him decide to make peace "-- at least in the short term --" with the religious right although Buchanan was an atheist who looked down on those who believed in God. However, Koch's most successful move was to "wrest control over the machinery of the Republican Party."

The author states: "the cadre's loyalty is not to the Grand Old Party or its traditions or standard-bearers. Their loyalty is to their revolutionary cause." Their entire loyalty is to unfettered capitalism, and to the protection of private property. They had no problem going after old time Republicans who didn't share their views: Senator Arlen Specter, Orrin Hatch, John Boehner are mentioned by the author with Boehner calling Ted Cruz, "Lucifer in the flesh."

The author laments: "We don't understand that the old Republican Party, the one my own father voted for during most of his life, exists no more. ... The Republican Party is now in the control of group of true believers for whom compromise is a dirty word.

"Their cause, they say, is liberty. But by that they mean the insulation of private property rights from the reach of government -- and the takeover of what was long public (schools, prisons, western lands, and much more) by corporations, a system that would radically reduce the freedom of the many.

"In a nutshell, they aim to hollow out democratic resistance. And by its own lights, the cause is nearing success." Orrin Hatch said after they funded his opposition, "These people are not conservatives. They're not Republicans. They're radical libertarians ... I despise these people."


Prologue: The Marx of the Master Class

Chapter  1: There Was No Stopping Us

Part I: THE IDEAS TAKE SHAPE

Chapter 2: A Country Boy Goes to the Windy City

Chapter 3: The Real Purpose of the Program

Chapter 4: Letting the Chips Fall Where They May

Chapter 5: To Protect Capitalism from Government

Chapter 10: A Constitution with Locks and Bolts

Chapter 12: The Kind of Force that Propelled Colmbus