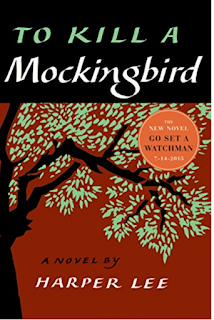 The first book I ever bought for myself.

I grew up on a “farm” outside a small town in southeastern Kansas. Coffeyville had a library that I loved but no bookstore. In 1961, I went with a friend and her family to the big city … Kansas City … where I saw my first bookstore and purchased my first book … To Kill a Mockingbird. I didn’t know anything about it so I’m sure it was just because of the intriguing title.

On that trip, I fell in love with bookstores and my idea of wealth was formed. Someday I would be rich enough to walk into a bookstore and buy as many books as I wanted.

TKM knocked me over. Kansas at that time was relatively progressive. Schools were integrated and most of us didn’t think much about diversity and social conditions. Actually, at that time of my life, I’m not sure I thought much about anything.
To Kill a Mockingbird made me think. Not long after that, I moved to Fort Smith Arkansas, where schools were not integrated and there were still “whites only” signs around. It was a different world and I could see the difference, and began to think about justice, equality and the world I wanted to live in.

To Kill a Mockingbird is now one of our most beloved books and definitely one of the books that shaped my world view. I'm not sure how many times I've read it, but it may be time to read it again.
Posted by Joyce Wycoff at 6:06 AM

Labels: To Kill a Mockingbird