No need to be surprised: Koan Art

Before I left Grass Valley to move to Ajijic, I started meeting with a meditation group that uses koans as part of the practice. Officially, koans can be defined as:  a paradox to be meditated upon that is used to train Zen Buddhist monks to abandon ultimate dependence on reason and to force them into gaining sudden intuitive enlightenment.

However, we were neither monks nor trying to abandon reason, but we did often have insights that felt enlightening.

This morning, I was cleaning a bunch of papers that had somehow gathered themselves into a pile when I thought I had gotten rid of all my piles. Apparently, I got rid of the piles but not the pile-maker. Anyway, I found one of the koans we had used and it intrigued me so much that I decided to use it as an art prompt.
Here’s the koan:

It’s past midnight, the moon has not risen.
In the thick, deep dark, you meet a face from long ago,
But you don’t recognize them.
No need to be surprised.

One of the reasons I love this way of making art is that I never know where it’s going … or where I’m going. I started thinking about faces from long ago and imagining family members, lost loves, even myself as a child. The “long ago” part also made me want a frame that suggested old, so I pulled one of the photos taken during the hacienda tour last week. I particularly liked this one because of the branches in the background, although I thought I’d wind up removing all of them. 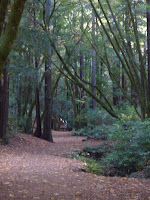 However, when I tried a blend mode, the whole thing turned mystical and seemed to have that “deep dark” feeling from the koan.

Since I needed a place to meet the face from long ago, I decided there needed to be a path to meet on.  If you could see a larger view, you would see that it's completely out of focus. Digital art doesn't care!
At this point, I was starting to like where this was going but still had no idea who I was going to meet. After trying several real and figurative faces, I was getting frustrated. I knew it was a woman and probably not someone I actually knew. Searching my photo base for women, I found a piece of wall art that looked like a candidate. I had taken the photo because I liked the woman’s stance. Again, not a good photo. 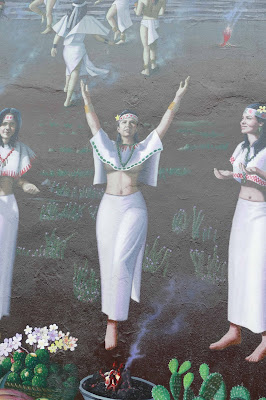 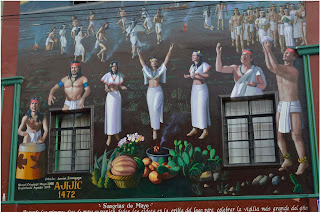 She is a piece of a mural by local artist Javier Zaragoza depicting the history of the area. Below is an internet photo of the entire mural. I knew she was the one as soon as she dropped into the image. But I still didn’t know why there was no need to be surprised. Only as I went back to the original mural, as well as the tour of the haciendas, did I feel the connection to the past and the present.
While there are layers of the past everywhere, here in Mexico, the layers seem to be a part of everything. The celebrations, the costumes, the ruins of buildings and civilizations past … all seem to be woven into the present.

Somehow, this koan art makes me feel connected to the past and to the women and men who came to this beautiful lake so many centuries ago.
When I look at this image, I feel like she, the priestess, is telling me that this present moment is also a future moment of the past, an illusion of permanence. Like her, we … I ... will always be approaching new doorways into unknown places, following the light of what calls me. There is no reason to be surprised. A familiar message.
The other thing I love about koans is that any other artist would take that same koan and come up with a completely different image.

Should any of you other artists feel so inclined to make art from this koan, I'd love to have you share your image in the comments section below.
Posted by Joyce Wycoff at 2:23 PM