I've never been a fan of Halloween or El Día de los Muertos ... perhaps it's all those skulls and skeletons. However, I am a sucker for a good story, especially those unsung-hero ones, so imagine my surprise when these two things came together.

I know I've been bucking the trend on Halloween for years as it continues to grow in popularity.  Perhaps I can blame my antipathy on my childhood. My mother's family came from Van Buren, Arkansas, and one of their biggest days of the year was Memorial Day, what we called Decoration Day back then because everyone went to the cemeteries and decorated the graves and had a thoroughly miserable time.

As a young kid who didn't know any the people who were prompting that weeping and wailing, I put it on the list of things I didn't like. That dislike of being around death transferred to Halloween and what I knew about the Day of the Dead which is coming up in two weeks and is one of the biggest times of the year here in Mexico.


I'm not quite sure why I decided to go to a lecture by Marina Aguirre on the symbolism of this day when I saw it posted at the English Library in Mérida. But, I did, and as often happens when I go to something not knowing why I'm going, surprise and fascination appear ... grinning ... and hand me a little gift bag tied up with a bow.

I was fairly familiar with the concept of the celebration (actually three days) as being one to honor the ancestors but some of the nuances make it much richer than I thought. The belief is that the ancestors actually show up ... if you have attracted them with candles or luminaries and added their photos or favorite things to the altar ... and then they need to be cared for ... fed with sweets and treats (and these offerings are not for the living), cheered with bright marigolds (again, never given to the living) and music. And, when the ancestors are happy, they can bring blessings to your life.
What I didn't know was the story behind all those skulls and skeletons, especially the ones in fancy costumes. It’s a tradition that started, and grew, through artists ... and politics ...  a particularly potent combination, especially in places where speech is not exactly free.

The first hero of the story is Jose Guadalupe Posada, a poor boy with a talent for drawing and a keen eye for the trends of the times. Under the controversial leader Porfirio Díaz, the rich were getting richer and the poor were getting poorer. It was a time when all things white and European were good and all things brown and indigenous were to be avoided if you had the money to do so.

Posada became a printmaker and, noticing what was going on his country, he began making a series of prints called calaveras which show skeletons and skulls with painted white faces dressed in fancy costumes. The one that would become famous was called Calavera de la Catrina (Skull of the Female Dandy) and shows a skull wearing a huge, European-style hat. However, it was not destined to bring Posada fame or fortune. He died poor and unknown in 1913. 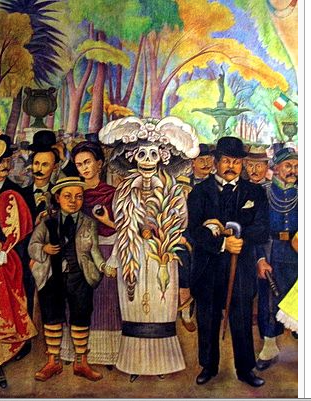 Several years later while visiting Diego Rivera, the French artist Jean Charlot was introduced to Posada’s prints and brought them to a larger audience. However, it was Rivera himself that brought Catrina and Posada into the popular imagination and launched the familiar symbology of the Day of the Dead when he brought Catrina front and center in his mural, Sueño de una tarde dominical en la Alameda Central or Dream of a Sunday Afternoon in the Alameda Central which is in Museo Mural Diego Rivera in Mexico City. In the mural, Rivera is standing beside Catrina and she is holding the hand of a representation of Rivera as a young boy. Behind them stands Frida Kahlo, Rivera’s wife.

So, now that I understand a bit more about the symbology behind all of this, it doesn't seem as much like a focus on death but more of a celebration of the duality of life and death.

If I live long enough, perhaps wisdom will arrive. Anyway, I will look at the celebrations this year with completely different eyes, especially since I will be right in the midst of them.
Posted by Joyce Wycoff at 4:22 PM