Slowly, a woman began to call out the name of each missing student and the crowd responded to each name by calling back, "Present!"

But, they were not present, there were no smiling faces, no jokes, no dancing, no singing, only silence from the seeds of the future.

Last night. winter darkened the hearts of each one of us who could still respond, "Present!" And, so the question is "what?" and "when? will each of us say, "Present!" for those students and teachers.

This story haunts me. It happened while I was in a foreign country, a country I have been fascinated with for decades, a country that touches me with its joy and deep vein of sadness. Could this have happened in my country? No country, no government, is perfect but could 43 students and teachers have just "disappeared" in the US ... without an uproar ... without it playing across the news channels for days, weeks ... or until an investigation was launched and those responsible held accountable?

Perhaps the bigger question is how much does it matter that this happened in a country that is not "mine?" Last night, as I walked through the crowds, it didn't feel like a foreign country. The words were unfamiliar but the sadness and anger throbbing through the crowd were familiar and we were one group of people feeling that sadness. Borders didn't matter, nationality, race, age, gender ... nothing mattered except that something terribly wrong had happened to a group of young people who were working to make the future better. 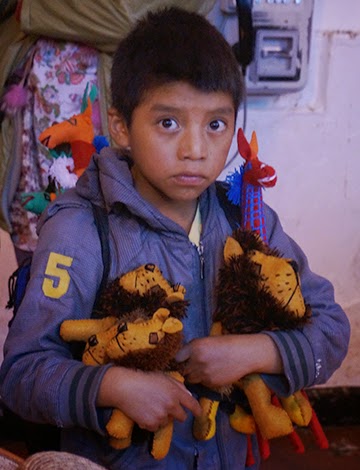 This young boy was in the crowd last night and he caught my eye as he clasped three stuffed lions to his chest and in his backpack were 5 or 6 brightly colored, stuffed giraffes. His somber eyes made me wonder about his future and what he must have been thinking and feeling as he wandered about the candlelit tribute. Was he related to one of the 43? Did he understand what was going on or was he just feeling the sadness?

I wondered what world he will grow up in ... and if he will be allowed to grow up at all?

The word "vivos" ... living ... was spelled out in candles and flowers. Some of the speakers and signs indicated that people still have hopes that the 43 will be found alive. After almost a month since they "disappeared," that seems unlikely but it is absolutely true that they are still living in the hearts and minds of people who want to know why they're gone and who is responsible for this outrage.

I know they are definitely living seeds of thought in my own mind and heart.