"Whenever you find yourself on the side of the majority,
it’s time to pause and reflect.” — Mark Twain

Why would someone who still has probably only a few hundred “fast memory” Spanish words in place even contemplate writing about the process of learning a new language? Could be hubris or it could be history or it could be just because it’s on my mind.

I have been on the “learning Spanish" path for at least three decades. Well, it is probably more accurate to say that I could see the path and every time I went to Mexico or wrote my annual goals, I tiptoed onto the path but always quickly got pulled back into “real life.”

About ten years ago I started signing up for adult ed classes in Spanish but seldom lasted beyond class 2 before getting terminally bored. I also started buying CD sets and sometimes made it to CD #2. However, last year, I launched the Pimsleur CD process since it touted a different approach to memory development. It comes in 4 levels and I actually made it to Level 3. (Some research shows that it may be the best of the electronic learning systems … I found it effective but very slow.)

Through all these years, I kept hearing that “immersion” was the only way to go and I dreamed of doing a language intensive in Mexico. After selling my house and gaining some freedom (and finding a life partner fluent in Spanish thus giving me added incentive), I was ready to take the plunge. I signed up for 4 weeks in San Miguel de Allende, 3 weeks in Playa del Carmen and 1 week in Mérida. That should get me well started, I thought.

Then the Universe stepped in and my 4 weeks in San Miguel became 2 and my 3 weeks in Playa turned into 2 days before I fled the heat and humidity for a place I had barely heard of … San Cristóbal de las Casas, where I am now and have extended my stay by another 2-3 months. My experience with immersion has led me to believe it’s a myth. Immersion per se does not create fluency … I’ve met a lot of expats who definitely have not mastered Spanish.

There’s a lot to be said about immersion … it’s fun and it does surround you with the language and offer opportunities for interactions that would not happen in primarily English-speaking countries.

As I have struggled with learning Spanish, I began to doubt the" immersion is the answer” standard and wondered if it were simply a myth (and the basis for a lot of commercial operations.) Are there other myths in play and just what is the best way to learn a foreign language? (And, just in case you've wondered, I do not believe there is any way to "speak Spanish in minutes," unless you count ordering a burrito as fulfilling that promise.

Sidebar: I’ve had a life-long passion for learning processes and spent a great deal of my career in adult education. I also love making “thinking models,” so it didn’t surprise me to find myself gradually developing a model for learning a new language … in my own way.

It isn’t surprising that the hardest part about learning a new language is the speaking of it. Lots of new sounds tangle our tongues and confound our ears and, when we begin, the perfectly accented words that play through our heads come out sounding like schoolyard Martian. The common wisdom is to start speaking as soon as possible, to be childlike and to not worry about mistakes or competency.

I started down this accepted path with the best of intentions. Three days into the class in San Miguel, I realized there was either something wrong with the process … or there was something wrong with me. So, I started studying harder but by day 3, I asked to switch to tutoring one-on-one. That was somewhat better. I liked my instructor but our conversations and the godawfulboring workbook exercises were frustrating and didn’t seem to be making much difference in my competence.

What made the learning process joyful was what I learned in the streets with my camera. Signs, menus, graffiti, brochures, information in museums … all of the real-world words that surrounded me. I took hundreds of pictures and then translated the words when I was back in my room … with the help of Google Translate. When I went to San Cristóbal, I didn’t sign up for a class … I just continued to walk the streets, gradually piecing together a learning process that made sense for me.

However, that nagging thought that I *should* be speaking more still haunted me, so this week, I asked a native speaker/instructor to practice with me and, once again, had a completely frustrating, disheartening experience that sucked the joy out of learning this language.

This made me really question myself … am I just a wimp (the inference of the instructor who was trying to force me to speak)? Is speaking without regard to mistakes really the best way to gain fluency? (What almost all of the "experts" say.) Could the majority of instructors who recommend this speak-first approach be wrong? So I turned to Google, where I found a lot of reinforcement for the “immersion-speak first and disregard mistakes” approach … but also a trickle of academics and other writers debunking that common wisdom.

Learning a new language is a complex stew of intent, motivation, natural inclination, memory and learning tools and processes. I am currently in my 7th week of this experiment of one. I have been trying stuff, keeping what is working and discarding what isn’t. Because I have the luxury of time, I can afford to experiment and I truly want to achieve a high level of mastery of this language. I believe that when I find the learning process that best fits my own learnings style, I will achieve that goal … while also staying joyful in the process.

Here are the basics of my new learning model:
- Build my vocabulary
- Improve my ability to hear the language
- Elevate my speaking
- Enliven my writing.
- Get feedback ... as instantly as possible

Perhaps the most important element of this model is feedback (in Spanish, it’s a tongue tangling ... retroalimentación). Years ago I had a personal epiphany about the importance of feedback … instant feedback. I have been a photographer since I was 18 but until late 2001 my skills never improved much. Then, I bought my first digital camera and, since money for film wasn’t an issue, I embarked on a weekly photographic documentation of an ever-changing, nearby park. Within a few months, my pictures showed amazing improvements in composition, contrast and color.

When I started looking for ways to get feedback … instant feedback … I found Google Translate (GT). Now, even though it’s Google, GT is far from perfect and sometimes it’s almost laughable. However, it’s still better than I am. I can write a sentence and then drop it into GT and know instantly some of the mistakes I am making. I can tweak within GT and gradually see my words coming closer to my intent. Gradually, I’m getting better. There are some amazingly good resources online and in a future post, I will share some of the best of what I’ve found.

So, for me, my present focus is on building vocabulary and understanding the basics of grammar, as well as the cultural forces that underly the language. Memory is also a fascinating part of the process and can be divided into “fast memory” and “slow memory” with the “fast memory” being the words and phrases that are so embedded that they surface quickly without conscious thought and the “slow memory” being the words and phrases that, while known, come slowly and haltingly to the surface. 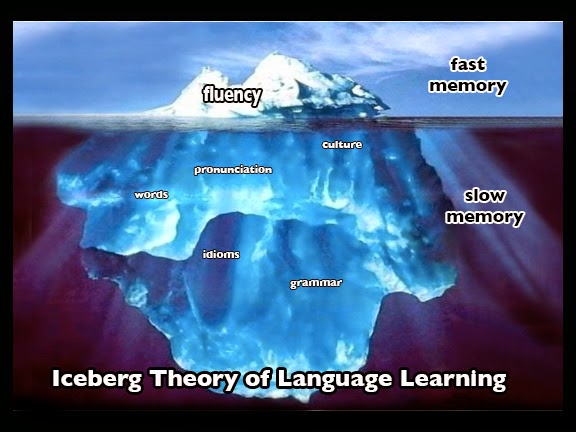 This led me to think of this process as the “iceberg theory" of learning a new language. It is a pretty common metaphor and I think every student of language experiences it. Under the surface lies a vast body of words and grammar concepts that are partially “owned.” Some can be retrieved gradually with thought and some are still in the murky depths and inaccessible without further reinforcement and memory work. I have just started using a flashcard app that I think is going to make a huge difference in bringing all that murky, partially owned stuff to the light of day.

And, the speaking thing? It’s coming. Right now I’m reading out loud a lot and thinking out loud as I continue to walk the streets … constructing sentences, hitting verbal road blocks that send me into wifi-friendly coffee shops to look up new words, try something out in Google Translate, or consult one of my new flashcard series. And, because few people here speak English, when I interact with a person in a store, I’m forced to speak Spanish. Gradually, that’s getting less frustrating and less scary.

If you want to learn a new language, it’s important to understand your own learning style before you begin. Not many learners will continue with an optional learning process if it doesn’t give them two things: a sense of progress and success … and joy in the process. Here are some resources that could save you some time and money … and help you do it YOUR ... a joyful way.

Top Ten Tips: http://www.studyspanish.com/topten_tips.htm - StudySpanish.com is one of my favorite free resources and offers bite-sized lessons on grammar that can be read and re-read as needed. Their tips reflect my experience and I wish I had them when I began this journey.

Twelve Tips from Tim Ferris the guy who only wants to work four hours a week and he is passing along the work of Benny Lewis. There is a world of resources in this article - http://fourhourworkweek.com/2014/03/21/how-to-learn-a-foreign-language-2/

If you’re starting from scratch, here’s a good beginning: http://www.wikihow.com/Learn-to-Speak-Spanish