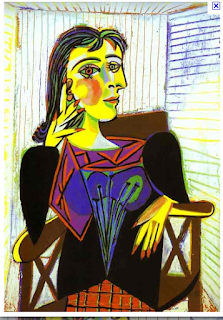 Picasso is clearly one of the most successful artists of modern times.  He must have been born under an exceptional star for he was successful from his teenage years when he arrived in Paris and by his mid-20s he was avidly collected.  He became the equivalent of a rock star and stayed that way until his death at 92.

Three of us went up to see the Picasso exhibit at the deYoung Museum in San Francisco.  It was an extensive collection that represented "every phase of his long career" including paintings, sculptures, drawings and prints.  At the end of two hours of viewing and listening to the audio tour, all of us had the same reaction:  "I don't get it."

It's clear that Picasso broke with the norms of his time and that he was trying to express time and space in a way that had never been done on a two-dimensional canvas.  Give him points for genius.  But, up close, his work is ... well, it is just ugly, dull and sloppy.  He is credited with creating 50,000 works of art ... perhaps that's the reason most of his work looks unfinished and rushed.  One painting had a horizontal line through the middle of it that was still visible even though it looked like he changed his mind and just scratched it out.  A painting of his son has a realistic face on top of a barely realized harlequin suit and a sketched-in piece of furniture hovering over what looked like three cartoon feet.  In many of the paintings there are what look like left over artifacts of previous studies.

Throughout the exhibit, quotes from Picasso were written on the wall and included on the brochure that was handed out.  According to the brochure he once commented, "Painting is just another way of keeping a diary."  That is exactly what his work looks like, quick sketches of his chaotic life as he moved from one woman to another, using the barest strokes to indicate their feminine form and being done with the women almost as quickly as he was done with a painting.  And yet, one piece of information from the audio tour indicated that he did over a thousand study drawings when preparing for one of his paintings.

After the exhibit, Picasso remained a puzzle for me.  On the whole I don't like his work and don't understand why he became so popular so quickly and remained that way his entire life.  The debate about what is art is endless and the question of what is great art even more complicated.  I'm sure my inability to appreciate the most influential artist of our time is more a reflection of me than it is a judgment of him  He has been judged by the world and found great ... but I still just don't get it.

This image is Picasso's "Portrait of Dora Maar" ... one of the few I really liked.