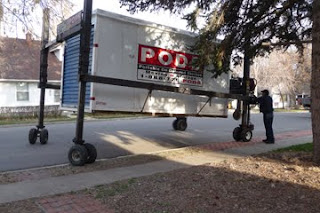 The pod is loaded.  The U-Haul is packed.  The car is crammed full.  The week of packing went exceptionally well ... except for the things that went missing.  The first was my wallet ... it was there and then it wasn't.  It's interesting to watch the thought process transition from "Where did I put it?" to "It MUST be here somewhere." to "It's really gone."  There were a lot of people in the house but my best guess is that I accidentally packed it away in a box.  The challenge was in two days I was heading off across country and I now had no driver's license, credit card, debit card or AAA card.  I began to scramble around trying to re-establish my identity.  (Is there a metaphor there?)

The second one was even weirder.  I was going to spend the night with my friend Lynne and as we got in the car to go to her house, she handed me her copy of my house key.  I took my copy off my key ring and added it to the small ring hers was on.  We drove to her house, walked in the door and I decided to put the keys back on my key ring so they wouldn't get lost ... and they were gone!  We looked every where, searched every nook and cranny of the car and retraced our steps ... I even went back to the house to see if I had dropped them in the street or something.  Nothing.

I feel like the chaos in my life has opened up cracks in the universe where things are disappearing.  I find myself yearning for routine and a sense of being settled.  It shows up in interesting ways such as obsessing about growing tomatoes.  I feel a little like a storm cloud racing across the sky when what I really long for is to just sit in a deck chair and watch white, puffy clouds float by.
Posted by Joyce Wycoff at 6:22 AM