The Mindset of Freedom 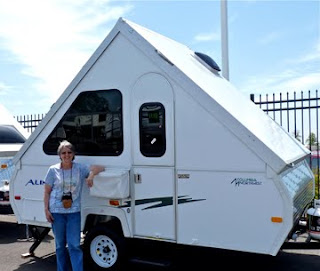 Live. A lot. Unleash yourself upon the world and go!  Go now! And fly free in the frowning face of convention.  Giggle.  No laugh.  No, howl as if you've never grown up.  Understand that this is not a dress rehearsal, this is it!  Take it all in.  Yes every last rose and every single breath.
-- Mercedes ad 2000

I've always considered myself an independent person and I think most of my friends and associates would agree.  And yet, my actions in certain aspects of my life have run counter to that sense of independence.  I got married when I was twenty-one and stayed basically married until a year ago.  In the process, I became very adept at supporting the interests, desires and hobbies of the men in my life.  Over the year I've encouraged the purchase of and time spent on typical boy toys such as motor cycles, hot cars, airplanes, RVs, boats, golf and fishing equipment, guns, knives, bows and arrows and so on.

Somewhere along the line I became better at supporting them than I was at supporting myself.  This was not their fault or their doing.  It was completely mine.  It wasn't that they wouldn't have supported what I wanted to do (and often they were very generous about doing exactly that); it was more that I forgot what I wanted, forgot to give myself permission to explore my own wants and needs.  I defaulted, and over time the marriages defaulted, to being more about their interests than my own.

During this past year of being officially single, I've started to realize just how much I've put my own interests on the back burner and, actually, how much fun it is to be very me-centered ... to do what I want, when I want, go where I want, spend my time the way I want, eat what I want, sleep when I want ... and buy what I want.

Yesterday, I went out and bought myself what would typically be considered a boy toy ... I guess in this case it's a girl toy which you can see in the picture.  It's called an A-liner and could be considered a portable nap-couch but, to me it represents freedom.  Freedom to go where I want, when I want and know that I can handle it by myself.  It's like wings ... I can fly wherever I want and stay for as long as I want.  It's a small thing literally but a very big thing figuratively ... an honoring of my own wants and a claiming of freedom for my life.

However, freedom is a mindset.  It isn't necessary to be single or completely self-indulgent to be free.  Freedom can happen within a marriage, within a commune, within any relationship just as well as it can for a single person.  In my case however, because I had lost the mindset of freedom, I've needed this period of self-centered singleness in order to regain my sense of what it is I want, who I am, what's important to me.  I am incredibly grateful for this time and the circumstances that have forced me to explore and reclaim the weft and warp of my life.

I know the next step on this journey will be to recognize the responsibilities that accompany this great freedom.  I do not intend to spend the entire remainder of my life in a hedonistic quest for pleasure (although it is a wee bit tempting).  I want the freedom to follow my own interests for doing good in the world every bit as much as I want to be able to indulge my passion for exploring the world in my own little bit of winged freedom.

But, for right now ...isn't it just the cutest thing in the world?
Posted by Joyce Wycoff at 10:35 AM