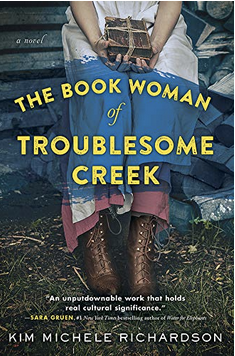 Sometimes a book comes along that grabs you with a powerful story, makes you fall in love with the characters and place, and allows you to discover a bit of little-known history. "Book Woman" is one of those books, deeply researched, honest and lovely on so many levels. Bluet, a mule named Junia and a dozen other characters will stay with me for a long time. This would make a great book club read.

Among the big, splashy programs of the New Deal there was a little known program called the "Pack Horse Library Project as a Works Progress Administration (WPA) program that delivered books to remote regions in the Appalachian Mountains between 1935 and 1943.”  - Wikipedia.
Most of the librarians were women who were paid $28 a month and had to provide their own mounts.
That could have been the story: book women traveling through the remote mountains of Kentucky to deliver books to families with no access to the outside world. However, there's another layer: the heroine, Bluet, is a an outcast, a woman of color ... blue, to be specific. She, and generations of her family, shared a rare blood disorder that turns their skin blue.

An aside: In the early-60s as I was walking across Oklahoma University campus, I saw a woman with blue skin and a week later I saw her again. None of my friends had seen her and there was some skepticism about the story. A few years later scientists discovered an enzyme deficiency that caused methemoglobinemia, which causes methemoglobin levels in the red blood cells to rise above 1 percent. It turns the skin blue, the lips purple, and the blood a chocolate brown.
I have also since learned that a form of silver poisoning can turn skin blue. This man, known as Papa Smurf has skin color like what I remember about the woman from OU.

Anyway, the point is that when I read the description about this book inspired by the blue people of Kentucky and a woman librarian who delivered books on horseback, it was a must read.
The book is an Oprah's Buzziest Books Pick for May (who knew there was such a thing) and Sara Gruen, author of Water for Elephants, says it is "...a hauntingly atmospheric love letter to the first mobile library in Kentucky and the fierce, brave pack horse librarians who wove their way from shack to shack dispensing literacy, hope, and ― just as importantly ― a compassionate human connection."
Some books transport you to a different time and space. In Book Woman, we find life as hard and hungry as the mountains, meet a cantankerous mule named Junia who is always one step away from being shot, and wonder at the connecting power of books, and the unending dance of generosity and discrimination, love and hate.
Posted by Joyce Wycoff at 7:25 PM