Think Different: a message for today 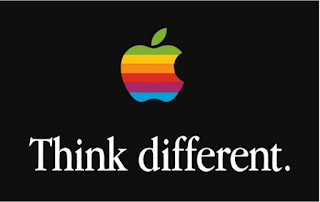 A little over twenty-one years ago, the world shifted … just a little.

On September 28, 1997, an ad was launched that called for people to Think Different.
It was the beginning of a turnaround for Apple and its stock tripled within the next 12 months.

In today’s world, perhaps now more than ever,
we need the words from this ad,
from a corporate leader determined to succeed,
from a group of creative people determined to tell a different story,
we need to come together as a people to think different
about our world, our future, our humanity.

The United States of America was born as a grand experiment in democracy …
flawed in many ways but determined to create a land of justice for all.

We’ve lost our way and it just may be that doing things the old way
won’t get us on track again.

We need to think different, see things differently.
We have to be crazy enough to think we can change the world.

Click here to see thes Think Different video, narrated by one of my very favorite actors, Richard Dreyfuss.
And here are the words:
Think Different

“Here's to the crazy ones. The misfits. The rebels.
The troublemakers. The round pegs in the square holes.
The ones who see things differently.

They're not fond of rules.
And they have no respect for the status quo.
You can quote them, disagree with them, glorify or vilify them.
About the only thing you can't do is ignore them.
Because they change things.

They push the human race forward.
And while some may see them as the crazy ones,
we see genius.
Because the people who are crazy enough
to think they can change the world,
are the ones who do.”
― Rob Siltanen, creator of Apple ad, in collaboration with others at the
TBWA/Chiat/Day advertising agency.