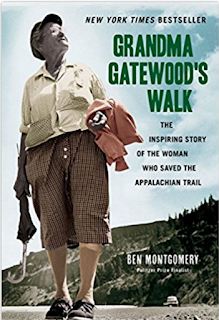 I have a new hero. As often happens, I met her in a book.

In early May of 1955, Emma Gatewood, left her Ohio home, caught a ride to West Virginia, a plane to Atlanta, a bus to Georgia, and a cab to Mount Oglethorpe, then the southern starting point of the Appalachian Trail, which wound 2,050 miles through rugged, mountainous country to its end point in Maine.
Emma registered her name in the logbook at the summit of Mount Katahdin on September 25th: 144 days of hiking, averaging roughly fifteen miles per day, carrying a denim bag she made herself, wearing out seven pairs of shoes, mainly canvas sneakers, with no tent or elaborate hiking gear.

She was the first woman to make the thru-hike. She was 67. 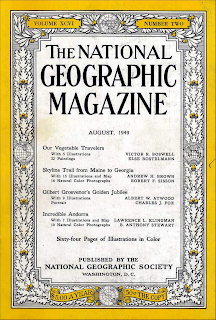 Emma was a tough woman, enchanted by nature. She bore 11 children to a sex-addled man who abused her physically and emotionally for thirty-three years. Walking into the woods was her escape. She fell in love with the idea of walking the new Appalachian Trail from a National Geographic article, and when she left to start her walk, she didn’t tell anyone. She had waited years, dreaming silently, until she decided it was time. (Click here to see the article that inspired Emma.)

The response to this older woman doing the impossible was remarkable. In today’s terminology, we would say that her story went viral. Ben Montgomery, the author, deftly weaves the threads of the story together … her walk, her life of abuse, the times, the history of the Appalachian trail, her amazing resilience and determination, and the reasons she did what she did. She didn’t stop with hiking the A.T. once … she did it three times … the last time at 75, although it was done in sections. She also walked 2,000 milesof the Oregon Trail from Independence, Missouri, to Portland, Oregon, averaging 22 miles a day, and helped develop the Buckeye Trail in Ohio. 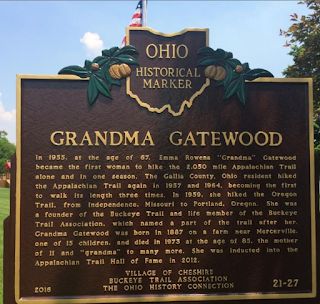 1955 wasn’t Emma’s first try at the Trail. She started from Maine in 1954, but quickly got lost and had to be rescued. As Ben Montgomery writes, the Appalachian Trail wasn’t just a walk in the woods. “There were a million heavenly things to see and a million spectacular ways to die."

Emma went home feeling like a failure, however, she was back the next year, lessons learned and starting from the south, determined.

As the public began to catch wind of what the 67 year-old woman was doing, the press swarmed her, always asking, "Why?" She gave many answers ... "It was something to do ... it was a lark ...." However, the author hints at something deeper.
Thinking about her life of severe abuse and caring for eleven children and all the chores of keeping a farm going, it's clear she never had time for herself. When her children were grown, she could finally choose her own path, her own way of spending her time. When she walked into the woods it was purely a selfish act.
Isn't it interesting however that she inspired thousands, maybe even millions of people to follow their own choices? Another reminder that it's never too late to fall in love with our own lives.

Interesting quotes about walking from the book:

Anthropologists estimate that early man walked twenty miles a day. Mental and physical benefits have been attributed to walking as far back as ancient times. The Roman writer Pliny the Elder (23–79 AD) described walking as one of the “Medicines of the Will.” Hippocrates, the Greek physician, called walking “man’s best medicine” and prescribed walks to treat emotional problems, hallucinations, and digestive disorders.

William Wordsworth was said to have walked 180,000 miles in his lifetime. Charles Dickens captured the ecstasy of near-madness and insomnia in the essay “Night Walks” and once said, “The sum of the whole is this: Walk and be happy; Walk and be healthy.” Robert Louis Stevenson wrote of “the great fellowship of the Open Road” and the “brief but priceless meetings which only trampers know.” Friedrich Wilhelm Nietzsche said, “Only those thoughts that come by walking have any value.” 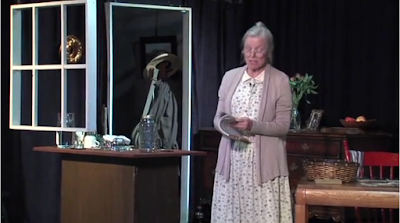