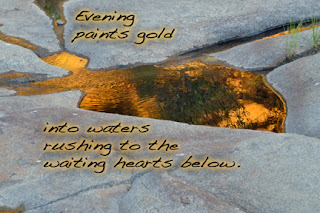 Two years ago, Marilyn Sholin told me to embrace Twitter and I asked "why?"  Like a lot of folks I've talked with, I couldn't figure out what the point was.  Why connect with a bunch of people you don't know just to see them tweet nonsense?  But, I have a lot of respect for Marilyn so I limped along with Twitter, still not getting it until a couple of weeks ago when I decided to give it a fair trial.  I think I'm starting to understand.

Don't get me wrong, in the general torrent of the Twitter stream, there is a lot of flotsam and jetsam but, now that I'm getting my feet wet, it feels like taking a snapshot of the universal mind.  One tiny but revealing snapshot.  This morning I came across @gennepher (Jenny).  I don't know Jenny or where in the world she happens to be.  All I know is what is on her profile:

@gennepher Wherever I am at the moment

Creative person, enjoying life's journey, the travel is important, not the journey's end. My haiga can be found at http://gennepher-haiga.blogspot.com/

She used a word, haiga, I wasn't familiar with and that sent me to Wikipedia which gave me the information below.  Then I went to Jenny's blog and saw her lovely and peaceful haiga, a combination of haiku or micropoetry and image.  And, somewhere within I now recognize the connection between us.
I proceeded to do my own decidedly non-traditional haiga which resulted in the image above, taken last weekend at River Falls.
Information from Wikipedia:
Haiga (俳画 haiga?, haikai drawing) is a style of Japanese painting based on the aesthetics of haikai, from whichhaiku poetry derives, which often accompanied such poems in a single piece. Like the poetic forms it accompanied, haiga was based on simple, yet often profound, observations of the everyday world. Stephen Addisspoints out that "since they are both created with the same brush and ink, adding an image to a haiku poem was... a natural activity.
Just as haiku often internally juxtapose two images, haiga may also contain a juxtaposition between the haiku itself and the art work. The art work does not necessarily directly represent the images presented in the haiku.