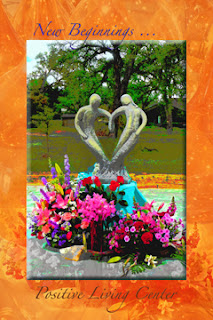 I love it when life delivers a lesson in a small, painless package letting us unwrap it and savor it slowly and gently.  Yesterday one of those packages arrived.

I attend a small, new thought church that lives in a run-down, commercial rental property.  A few years ago, "we" bought a four-acre property with the intention of building a new church home.  Two weeks ago the foundation for the building was poured and now the challenge is to raise the $150,000 it will take to build it ... current building fund: a little over six thousand.  It's a big step and no one knows how it will happen.  But, intentions are strong and we've seen miracles happen before.
Two months ago, we were told that we needed to pay over $30,000 in fees before building could begin.  A group from church appealed and presented a four-page, single-spaced list of everything the church has contributed to the community.  It is an impressive list and the Board of Supervisors abated all but $2,000 of the fees and they were made payable when construction is complete.  But, still, $150,000 is a lot of money to raise for a small congregation in a rural community.
A few weeks ago I decided that this could be an interesting story in the making and offered to document the progress of the building fund.  Last week I suggested to a few of the leaders that we take an altar statue to the site and create a beginning picture to help us visualize the possibilities.  The idea was well-received and we made a plan.  However, somewhere between that moment and the following week, I faltered.
I began to think it was a stupid idea, that no one would show up, that I was being a pushy newcomer, that Mother's Day was the wrong day, and so on and so on.  Yesterday dawned cold and a little rainy so I decided it definitely wasn't the right day.  When I arrived at church, I told the person leading the service to announce that we would do it next week, thinking it would probably just fade away.
Then the first speaker started talking about mothers, which I expected, and about divine creativity, which I hadn't expected.  I noticed that the room was filled with flowers, bouquets left over from a mid-week memorial service and the roses that all the mothers were given as we arrived.  Suddenly, I realized that this was the perfect day to celebrate the beginning ... the birth ... of our new church home.  On this day of honoring mothers, we were also mothering a new idea, a new intention.  I also realized that I had almost killed my idea ... I had failed to mother it.
Fortunately, I was able to let the leader know that the plan was back on and dozens of us went to the site, taking the flowers and the symbolic statue with us.  We took pictures and enjoyed our first gathering in our new location.  And, I was reminded about the importance of mothering and protecting ideas ... they are fragile and need to be nourished and supported.
This image will hang in the sanctuary as a symbol of the building to come.  I will periodically report on the progress of the Positive Living Center building project.
Posted by Joyce Wycoff at 9:13 AM