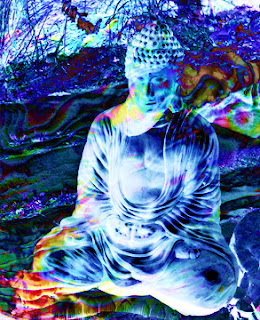 Yesterday was my one year anniversary in my house ... a lovely milestone, especially because there is no move on my horizon.  I love settling in,  slowing down, seeing the first tiny tendrils of roots sinking into the ground.

The house came with a cat.  A big, white, outdoor cat named Bubba.  The name didn't fit him so we changed it to Boo and he didn't seem to mind as long as the food showed up regularly.  Boo is probably 8 or 9 which means he's a pretty resourceful cat to have survived that long outdoors in a land full of predators.  One of the lessons I've learned from Boo during this past year is about non-engagement.
Every night we put out dinner for him and before I go to bed I take the dish back in so the coons don't get to it.  Everyone seems to love cat food.  The dogs crave it and usually manage to get to it 3-4 times a week.  There's a black cat in the neighborhood that often shows up for a free meal.  And, the coons have figured out if they come earlier, they'll get more food.  A few times I've been able to watch these invasions and noticed Boo just sitting in his chair at the far end of the deck, watching.
He doesn't defend his territory; he doesn't make a fuss over his stolen food.  He seems to know that more food will show up regularly.  A few months ago, he had a run in with something and wound up with a nasty abscess.  Maybe that's when he learned the value of non-engagement. But I watch him now sitting quietly while some other creature eats his food and I think we should have changed his name to Buddha.
I don't know if Boo/Buddha has an actual mindset of non-engagement or if he just has confidence in the principle of abundance.  It occurs to me that maybe the two are intertwined.  If we actually believed that there was Enough, enough food, enough wealth, enough power, enough love maybe non-engagement would be easy and we would be able to put aside our tendency toward war, violence and greed.
i want to be more like Boo, accepting each day as it comes, knowing that everything I need will be right in front of me.
Posted by Joyce Wycoff at 7:05 AM