Love Letter to My Life #51: Everything dies, but seldom when we're ready 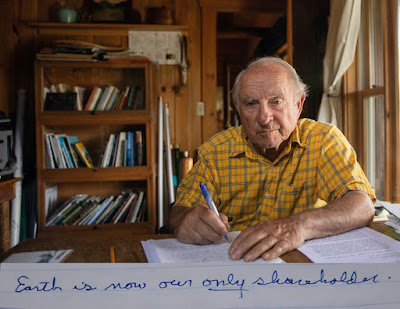 (We know the day we were born, but most of us do not know the day we will die. This love letter to my life is written on the day I've designated as my death day: the 17th of every month, and reminds me to be grateful for my joy-filled life. In  December, I get to celebrate both my birth and death days on the same day. Joyce Wycoff)

There’s something about having done 50 of these love letters that makes me wonder where I’ll be on #100 … assuming, of course, I make it that far. 49 months from now will put me at October 17, 2026, and safely into my 80s.  Not only is there a possibility that I won’t be here, there’s a probability that death will touch my life in the next four years, whether it be friends, acquaintances, the ultimate loss of whole species, or the multitudes that will be lost to climate disasters, famine, plague, war and other violence. Everything dies, but seldom when we’re ready.

This week Yvon Chouinard and his family gifted Patagonia, valued at $3 Billion, to the earth. They resigned from the billionaire club and constructed an elaborate system which is estimated to yield approximately $100 million dollars per year to be used for fighting the environmental crisis and defending nature.

Patagonia has contributed to this same cause for 50 years and has already contributed over $140 million to environmental conservation. I’m sure I’m not alone in thinking, if the Chouinards can do that, what can I do? If we all rise to the Patagonia challenge of doing whatever we can, perhaps we can stop this slide into chaos.

Today, I took a break from a long run of focused work and decided to “make something beautiful.” I started trying this and then that, and experimenting with a couple of Photoshop tricks. It was going well enough until the words “everything dies” registered in my brain and things started turning dark.

An egret wandered into the picture early on. That wasn't surprising. I fell in love with egrets while in Ajijic and spent many late afternoons taking hundreds of photos of them reflected on the water, colored by the setting sun. They appeared in a lot of photos and paintings. Here are just a few:

However, today was different. Not at first, but gradually the image took on an ominous feel until I finally recognized it as The Last Egret. I know there will be a last egret for me, just as there will be a last everything. The particular one in this image was in Florida and now I see them at the lagoon near me. I don’t know when I will see the last one, but knowing that I will makes my heart ache.

Knowing that there may come a day when every egret is gone is heart breaking. I don’t know what I can do to prevent or delay that day but Yvon Chouinard just convinced me that I can do something … I have to do something. I hope you … all of you ... find your own something.