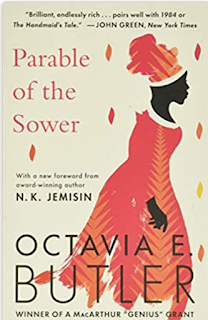 In the early 1990s an American science fiction author wrote her way through a vision of dystopian societal collapse. More nuanced than Mad Max but lacking the Hollywood-handsome and heroic Mel Gibson, broader in scope than The Handmaid’s Tale but lacking the fetching costumes, Octavia Butler’s Parable of the Sower, published in 1993, and set in the near future of 2024, is a bone-chilling cousin to the reality of 2021.

In the beginning, many readers dismissed Butler as a naysaying pessimist telling an unbelievable and impossible story. Twenty-seven years later, many of us wonder:  How did she know?

In case foretelling the future as if it were a YouTube video in a crystal ball weren’t enough, Butler launched a religion; real or fictional depends on your perspective.

Wikipedia: Earthseed is a fictional religion based on the idea that "God is Change".

GodIsChange.org: Earthseed is a real religion inspired by the science fiction of Octavia Butler, specifically her books, Parable of the Sower (1993) and Parable of the Talents (1998).

Story: Near Los Angeles is Lobredo, an isolated community walled against ever-increasing crime and violence resulting from the crashing waves of greed and corruption, climate change, and rampant, isolating technology. As the foundations of society are eroding, hope for the future is lost.

Teenager Lauren Olamina tells the story of the disintegration of her world and her family in her journal, while also writing verses for a new religion she calls Earthseed.

The catalyst of this collapse is a basic lesson we’ve yet to learn, and is the first precept of the Earthseed religion:

"All that you touch
You Change.
All that you Change
Changes you.
The only lasting truth
Is Change.
God Is Change.”

In the “rational” world, we call this The Law of Unintended Consequences and believe that if we just think through the situation carefully enough, we can outsmart it. We can’t. The minute we touch it, it’s changed and requires changed thinking.  Rinse. Repeat

in her words about power:

“All struggles are essentially power struggles.”

This is the essence of the struggles of 2021. Our country’s attempt to balance power with a two-party system is crumbling as one party weakens and becomes desperate to hold onto power by using whatever means necessary. We are becoming bifurcated in too many ways: Republican/Democrat, black/white, rich/poor, male/female, urban/rural, straight/gay, old/young, violent/non-violent … an endless game of this or that, them or us, where what is lost is our sense of connection to our neighbors and unity of purpose as a country.

Butler’s answer is science fiction: head for other worlds. This is the third precept of Earthseed, the religion: “The Destiny of Earthseed is to take root among the stars.”

In spite of Elon Musk and Jeff Bezos, I don’t believe colonizing other planets or space offers us much of a solution. We are earthlings … and there are too many of us. The only real choice we have is to collaborate, work together and take care of each other. However, in a world with too many guns and a climate growing more hostile to agriculture and economies, desperate people will resort to violence and self-protection. The more desperate people there are, the more violence we will experience.

We in the rich nations of the world talk of rising seas as if we might lose a few coastal mansions. In Bangladesh, however, the next several years will see as many as 18 million people forced to leave their homes. 18 million people without homes, without jobs, without resources. We give it a scientific sounding term: climate displacement.  However, it’s as if everyone in Florida were forced to move to Georgia (population 4 million). They wouldn’t fit.

Two-thirds of Bangladesh is less than sixteen feet above sea level. But, Bangladesh is over there. They’ve always been poor. We can’t worry about them. The question that affects us all though is: where will they go? Europe? India? India is already trying to build a fence around their overpopulated country. And, Bangladesh will not be the only victim of climate change. Change is God in action (Earthseed). And, change is not benevolent nor malevolent; it just is.

The COVID-19 pandemic gave us some hints about how we might handle future massive changes. Some people sacrificed, hunkered down, protected themselves and their family and friends, made do with less. Amazing generosity flowed from unexpected places. Other people grabbed their guns, burned their masks, and blamed everyone outside their small circles.

Most likely, this is the way it will go.

More division rather than less.

Less all for one, one for all.

This is the precipice. Now is the moment when we still have a possible alternative future. We still have time to think of Earth as a neighborhood and all of us on it as neighbors. The Biden/Harris administration has committed to making 80 million doses of COVID vaccine available to the world in the understanding that COVID is a global challenge requiring vaccination in Bangladesh as well as Florida. 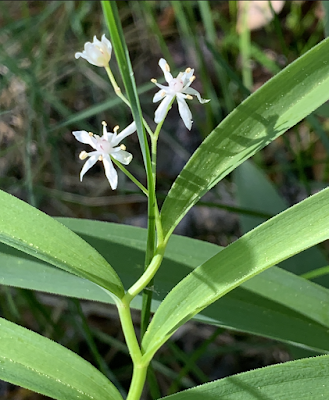