When the Universe weaves threads together and makes us wonder.

This incredible piece of art stopped me in my tracks while touring the extensive Huichol exhibit at the Museo Zacatecano. It stopped me, not only because it is stunning, but because I had seen it before ... not only had I seen it, I had bought it ... for my couch ... and my new yoga bag.

When I first moved to Ajijic, I lived in a lovely small apartment that had recently been remodeled and was basically colorless. The couch was solid gray so I went to Alejandra, a local woman who makes amazing things, to see if I could get my couch cushions recovered. When I walked into her tienda, I was immediately captivated by a colorful, surrealistic material and wound up with this couch. 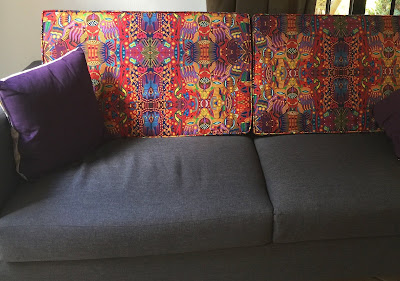 When I moved, I couldn't take the cushions with me because they belonged to the couch which wasn't mine. Those cushions were one of the few things I missed from that apartment, so I went back to Alejandra and had her make me a yoga bag from that material!

Things like this make me smile. It's obvious that I have a connection to this colorful material, but I had no idea it was anything other than a colorful design. Now I feel a call to find out more about this piece of art and delve deeper into the Huichol culture.