Golden anniversary of a different sort 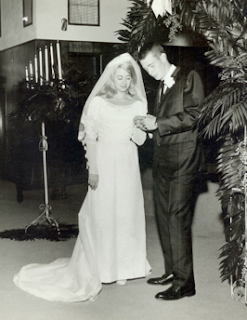 Fifty years ago I married my first love. He was on his way to Vietnam and had three weeks at home. We wanted to spend as much time as possible being married and would have eloped, but his mom insisted on being married in a church, with real invitations.

So, we told our folks they had a week to get ready. It wasn’t a glamorous affair but we did it and headed out for a 2-day honeymoon on Mount Magazine, at 2,753 feet the highest mountain in Arkansas. We wanted to spend most of our precious time just being married. We didn’t understand the realities of war, but we did know that there was a possibility that this would be all the time we would be given.

We were babies then. I, barely 21. He, still 20. There was so much we didn’t know about life and making a life together. About ourselves and what we wanted from life. I could blame the eventual ending of our marriage on Vietnam, and it definitely played a role, but I believe it was all those things we didn’t know that took the biggest toll. We weren’t yet baked as human beings and the 13 months he spent in Vietnam was a hotter, more violent fire that changed things … changed him ... in ways I could never comprehend.

Sometimes I have conversations with friends about what we regret in life and often the response is that the person has no regrets. I think that generally means they have made peace with the way their life unfolded. While I honor my life and my journey, I do still have regrets. I very much regret my youthful ignorance. And, I regret the reception we as a country gave our returning soldiers. We didn’t understand the horrors they had gone through nor the pain they were in. We just wanted to go on with our tidy lives. I didn’t understand the hidden wounds of my too-young soldier-husband. I don’t know that being wiser and more compassionate would have changed the outcome of our marriage, but I truly wish I could have been wiser than I was.

The only way I know how to make that regret more bearable is to resist more conflicts that consume our young.

Sometimes, love is not enough. Always, war is too much.
On this Memorial Day as we honor those who have served, let us pledge: Never again!
Posted by Joyce Wycoff at 5:54 AM