It's a Four Agreements morning 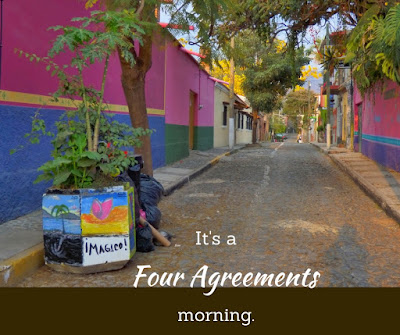 Facebook brought me news of a death yesterday, a friend from high school. It hit me hard, harder than I would have thought considering I had not seen or heard from her in over 50 years. She was a bright light from my high school years, someone I considered one of my best friends.

I don’t often dream of people, but, over the years, I occasionally dreamed of her and those dreams had a special quality. They were like reunions. I would always awaken with a joy of reconnection as well as a mourning of the lost friendship. We were separated the summer before our senior year when both of our families moved. We wrote for awhile, but those were the days before Facebook, and eventually life separated us and the tie was broken.

I tried to reconnect a few times over the years but met with unspoken rejection. For a multitude of reasons, I took it personally. This morning I poured my feelings of being unloved, unwanted, rejected into an Evernote file until the Four Agreements shouted: Stop the pity party!

The conversation continued: Yes, you were rejected by someone you once loved. Yes, that person didn’t approve of the way you lived your life. Yes, she’s now dead and you will never be reconnected in this life. Yes, she was hard-hearted toward you. And, yes, you’ve probably been equally hard-hearted toward someone who loved you. She was human. You’re human. People aren’t perfect. You’re still alive … try to do better. Keep your own heart soft. Be kind to yourself and others.

All right already.
Posted by Joyce Wycoff at 6:14 AM