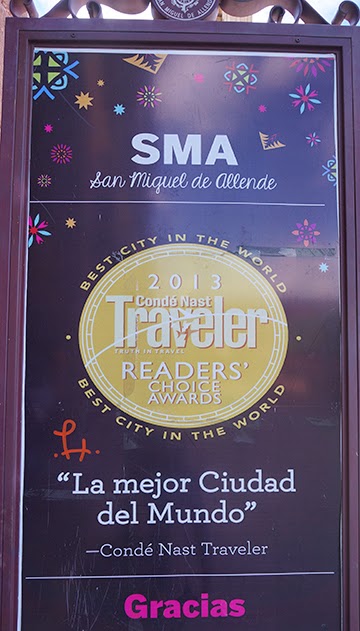 Esta mañana, he vivido mi blog.  I idylled about for four hours, depleted my camera battery, got lost and then found again, listened to a band play with great gusto for such an early morning and in such an empty tent chapel that completely blocks one of the small arteries SMA calls streets, and followed a tapping sound only to find a man engraving a tombstone.

All in all, I decided that Conde Nast could be right … this might just be "the best city in the world." (See review below)

I'm sure there are many faces of SMA; so far I've only noticed two …

The city of the singing bells (La ciudad de las campanas de canto) - the historic district of SMA is dominated by churches and today is Sunday. Late morning all the bells began to sing and the city was filled with their vibrations.

The city that blooms (La ciudad que fluoresce) - when I began 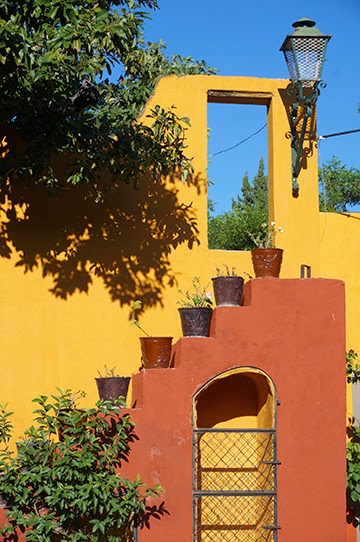 my ramble early this morning, I was struck by the colorful and interesting doorways … it is said that there are over 2000 doorways in the historic district. After rambling about for a few hours, I headed back toward my place and found a different world.  The doorways were opened and festooned with a riot of colorful products … clothes, bags, jewelry, hats, fruits. The cobblestoned streets had literally bloomed. 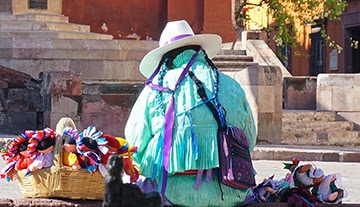 Conde Nast:
In the category of the world’s Top 25 Cities, Mexico’s San Miguel de Allende received first place.  The city is located in central Mexico, in the state of Guanajuato.  It features a cool climate, a colonial downtown and a thriving art scene.  It also has a large American/Canadian colony.

According to Condé Nast Traveler, "The lack of street lights and billboards makes the region romantically and historically beautiful, and the city itself offers a traditional feeling of a small town in the heart of Mexico."  Other positives of the city were "great atmosphere, excellent restaurants, culture and ambiance galore."  Another comment was that San Miguel de Allende is simply "An amazing place to be."