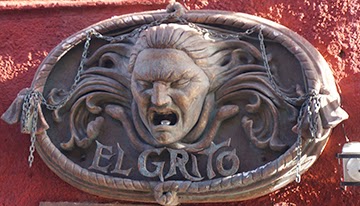 Several days ago I took a picture of an iconic decoration on a building. It attracted me but I didn't understand the words or the image. Google Translate later told me the words meant "the cry" but still I didn't pay much attention to it. The past two days have brought that image into focus and made me think about history and life in a different way.

The San Miguel area has been designated the cradle of the Mexican Independence from Spain, which began at 11 pm on September 15, 1810, giving people a chance to celebrate for two days … the 15th and the 16th … and celebrate they do. It's impossible to be here at this time without being reminded of the history of this place.

The action that became the war of independence started with a shout … which is a better translation of "el grito" … when a firebrand priest in the small, nearby village of Dolores Hildalgo convinced the locals to take action.

Father Michael Hildalgo was later honored by the village which adopted his name. San Miguel also honored Ignacio Allende, another leader of independence, by adding de Allende to its name.

I spent a lot of yesterday and today in the central plaza watching parades and re-enactments, listening to music and people watching.

At one point, someone led the crowd in a series of chants … "Arriba! Arriba Hidalgo! Arriba Allende! Arriba Mexico!" and so on.

This started a conversation about what "arriba" means. The simple answer is "up." However, searching the internet didn't reveal a good answer so why it is used as a chant is much more murky.


I began to wonder if the word is related to the revolution … perhaps that's what riders said to their horses as they charged … perhaps it was their way of saying "Up with Mexico!"