Two years ago, my friend Suzanne and I had a retreat at her sister's house on Kiawah Island, SC.  We took hundreds of photographs and tonight I was wandering through them and found one that I was particularly taken with at the time.  It was a curly weed amidst tangles of beach grass.  But as much as I loved the photo, I couldn't make it leap out at me as it did on that chilly day on the island.

So tonight I started playing with it, intending to just spend a few minutes seeing what would emerge.  Slowly it began to speak to me and, hours later, I realized that I was in  collaboration with a master artist.  The colors, the brush strokes, the dramatic energy ... they were all there just waiting for me.  My job was just to set them free. 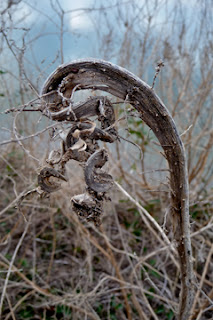 One of the presenters at Ariane Goodwin's SmARTist Telesummit asked us to ask ourselves why we are artists.  Tonight the answer came back again ... because it is so much fun!

Here is the original photo which has haunted me for the past two years.