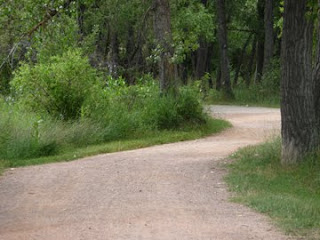 This summer as I was beginning to pack my stuff for the transition from one life to another, I picked up a book titled Shed Your Stuff; Change Your Life by Julie Morgenstern. I never buy books like that but I was walking through the airport and it almost jumped into my hands, so I read it and began to follow its advice. I got rid of tons of stuff ... literally tons ... stuff that I had been carrying around for years ... stuff that was no longer serving me. In the introduction, the author states:

The theory behind SHED (the process you will learn about in this book) is that by releasing your attachment to obsolete, tangible items in your space and schedule, you will gain the energy, insight and clarity to make decisions about the big stuff. SHEDing creates the space to think; it fortifies your identity and eliminates old, unhealthy belief systems.

I don't know if I can give complete credit to "SHEDing" for the changes that have happened in my life, but I do know that new doors are opening and I feel a deeper sense of peace ... (most of the time ... ;-) ... than I've felt for a long time. But, now as I contemplate how to develop greater "equanimity," I wonder if I also need to shed some of the intangibles I've carried for so long, intangibles that may be weighing me down even more than the 600 tangible pounds of books I let go of this summer.

This morning I let go of the fantasy of resurrecting an old relationship and in dissecting the carcass of that fantasy, I realized that I've been carrying around the belief that I need to live someone else's life ... that somehow I can't or don't deserve to live my own. It's probably the residual from childhood where I was living my parents' life and then from two marriages where I was basically living my husbands' lives. That's a lot of years of fitting my wants, needs and beliefs into a structure mainly created by someone else. For the first time in my life, I'm living in a structure that I created for myself ... a scary, exhilarating, overwhelming at times but ultimately freeing experience. Letting go this morning felt like being a trapeze artist who lets go in mid-air and turns ...

Will I catch the bar coming toward me and swing into new space? Or will I miss and fall into the safety net below? And, is there a safety net below? At this point I don't know but I feel like I've made an important step in shedding this old belief. I will live my own life. I will follow the path that calls to me. I will live MY life to the fullest extent possible.

And it is scary ... I don't know if there is a safety net but I do know that I have dealt with everything that has come my way so far and that I will be able to deal with whatever lays before me. And, just like in the picture above, I don't know where the path leads but I know as soon as I round the corner, I will see a little further and all I have to do is keep moving forward and following the path ... my path. I am on the journey of my life and it might eventually connect to another's path but even if it doesn't, the important thing is that I'm now on my very own path.
Posted by Joyce Wycoff at 5:28 AM