Why do I have to do this? Why do I have to ask people for help? Why can’t the phone just ring and someone say, “I hear you’ve got just what I need and I’m willing to stop by and pick it up and give you a bunch of money …”?

You hear stories all the time … like the pet rock guy. Actually Gary Dahl, who while in a bar with friends who were complaining about their pets, joked about his low upkeep pet … a rock. His friends laughed as he riffed on the benefits of his pet. Dahl was so intrigued with the idea that he went home and wrote a “care and training” manual, designed a carry home box with air holes, and convinced two friends to invest in the project, one to the tune of $10,000 (in 1975 dollars).

He debuted the idea at a San Francisco gift show and within a few months sold a million and a half pet rocks at a profit of 95 cents each. You do the math.

However, it was a short-lived fad that wound up in court when Dahl’s two investor friends decided they hadn’t gotten a fair share of the loot. Some say the left over pet rocks paved Dahl’s driveway.

It’s a great rocks to riches story, however, when you get right down to it, I ask myself: would I be happy with the fad success of a pet rock or if John Beresford Tipton dropped by with a million dollar check? (When I was glued to The Millionaire in the late 50s, that was truly a fortune.)

Perhaps at least part of the problem is defining success. Over the past year, Lynne Snead and I have created and used a workbook/journal focused on gratitude and self-awareness. We think it’s the cat’s meow and have an overflowing basket of stories about how it has transformed us. 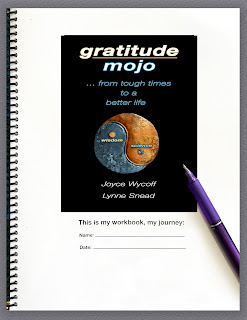 Now we want to share it with the world. Somewhere along the line, however, the term for that became marketing, and about the same time the marketing scoreboard became $$$.

And, what’s wrong with $$$ you may ask? Nothing actually, except that money doesn’t much motivate me. I’m in the pretty incredible position of having enough and value my time more than more money.

My version of a fairy godmother’s gift would be to have her wave her magic wand and suddenly all the people in the world who wanted it would have their own copy of Gratitude Mojo and we would sit in a very big coffee shop and regale each other with the turning points that came from this practice.

Now that would be fun!

Much more fun than designing shopping carts and affiliate programs. I can hear it now. Someone is bound to say: just delegate the parts you don’t like. Great idea, and this is where $$$ comes back to haunt me. My enough isn’t enough to hire a fairy godmother who can wave her magic wand and help me build the World Gratitude Cafe.

Lynne reminds me that one of her mentors said it was okay to visit Camp IWannaWhine … but to not move there permanently.

And … I have to admit ... when I was thinking about the World Gratitude Cafe, a tiny idea-worm wriggled onto the page.