Been There Voices: Susan Larson - Longing for one more visit with my mother 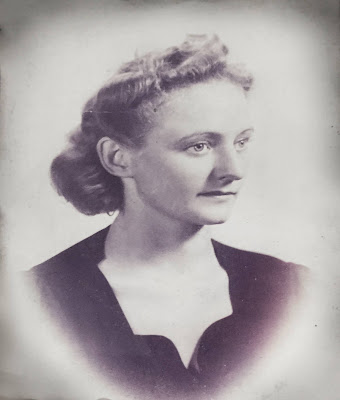 My mother, Evelyn Jean Irvin Bagwell, was born in Arkansas in 1924 and died in MS in 1978. She lived a relatively short fifty-four painful years. She was the last of five children and she was born at home, delivered by a country doctor who was, apparently not very skilled with the use of forceps. This left her with damage that affected her left ear and eye. And a fatal cerebral aneurysm that was silently growing throughout her life.

Her three brothers were all sent to university but she and her sister were expected to marry well. Her bothers and sisters did all marry well but my mother had a “lazy eye” from her forceps delivery and that probably impacted her suitors.

It isn’t so much “what my mother told me” but the strength she showed me living through unspeakable adversity. It is one of life’s tragedies that so many of us don’t fully appreciate our mothers until it is too late. Since I was the eldest of five, Mama often called on me ,“Sister Sue”, for help with something and anyone who is the oldest might recognize the feelings of being called on too often.

Oddly enough, my mother and I had much the same personalities and pushed the boundaries of acceptable behavior for the times we were growing up.  Hence, we were often yelling and screaming at each other as I entered my teens. I still cringe at my behavior.

She met my father in Seattle and they married in 1948, from that point on she was constantly pregnant, bearing five unruly children, one a set of twins, and several miscarriages. Not only was he an alcoholic, but he worked in a shipping company and they went on strike several times that I remember and her tiny diamond engagement ring was pawned and returned after each strike was over. In addition to his alcoholism, he was a severe asthmatic and went to a dusty baseball game, came home drunk and died on the couch just before my tenth birthday.

This led to our move to MS to be close to my father’s family because her family was all over the US and she got so little with Social Security, she couldn’t afford to live in a big city. And with five children under the age of ten, she couldn’t work.

Not long after we moved to a tiny town in MS, she began to experience severe headaches and my grandfather came and took her to the University Medical Center where they discovered the inoperable aneurism. It was located on the right side of her skull near the temple area and every time her heart beat, blood would pulse through the vein, sticking her skull, and it finally wore away her skull, then pressing directly on her brain. This left her increasingly paralyzed and within four years her windpipe would not close when she ate, leading to horrific coughing and gagging at meals. Imagine, five little kids terrified and running to get neighbors to help. She went into a nursing home at age fifty, confined to a wheelchair she could push with her one good hand and the only thing she could eat was yogurt. She literally wasted away.

Through all of this, each of her children, except Herbie who committed suicide in 1977, each grew into strong successful people. She never drove or owned a car and my cousin come and picked her up for family gatherings and he told me once, “Aunt Jean always had funny stories to share” as he drove her to and from different things. I never heard her say a mean word about my father and she would often joke “whenever he hung his pants up, I got pregnant.”

I learned from her the value of small gifts. One time she told me a neighbor lady, Ruth Grimes, came in her car and took her around to see the dogwoods in bloom. She talked on and on about how beautiful they were.

By that time I was living in Jackson and each month I would drive up to the nursing home and take her to visit relatives or just drive around the little town where we had lived. She would try to eat something and end up almost choking to death. She always wanted to stop for a beer and managed to drink most of it. I was working for Blue Cross at the time and traveled to hospitals for problem cases and in-services. Whenever I was near the nursing home, I would stop by, all dressed up in my suit and she would just beam while we visited as she would tell everyone we passed “This is my daughter, Susan.” Never mind they all knew who I was.

It was a tradition that she would come to my house for Christmas and spend the night. This was the highlight of her year. On Christmas Eve, 1978, my brother was driving to pick her up and bring her to my house. The attendant got her up to the bathroom and washed her face, getting her back into bed to wait for breakfast. When they went back, she was dead. The doctors had told me that when it burst, it would be like turning off a light. And it was. She was only fifty-four. It is still heartbreaking to me but I know she died happy.

As children we all called her a hypochondriac and thought she was addicted to drugs. We were all sent to live with family members for extended periods of time because she was so frail and could barely feed us. But I remember how cold it was in the winter and we only had a space heater in the dining room. Every morning she would get up and warm our socks, underwear and clothes in front of the space heater before we put them on. She fed us oatmeal before we walked to school because it would “stick to our bones.” We never understood the physical and psychological pain she endured every minute of her adult life ... until it was too late.

Now at seventy-one, I long for one more visit with my mother.

Click here for more about Susan and other Been There Voices