Been There Voices: It's too late for ... 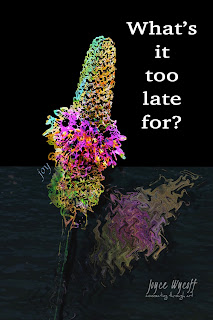 One of the prompts for the Been There Voices group was to think of activities or dreams which you think it’s too late for and then find a piece of one of them that’s still within your reach. We were just getting organized so there are only a few responses, however, they are thought provoking. How would you respond?

Susan Larson: We all probably remember the bright yellow boxes of Crayolas and coloring books. Boy, how I yearned for one of those new 64 packs of colors;  I was lucky to get the eight pack. But try as I might, I never could stay in the lines and I would look over at someone else’s work and became totally discouraged. I felt like Pigpen from Charlie Brown comics as I hid my work.

It wasn’t until I was in my 50’s and I became friends with various art teachers in the schools where I taught that I began to understand a tiny bit about art. This became one of the top things on my bucket list for retirement.

During this period I went to a nonspeaking vegan yoga retreat in an isolated part of Cambodia. It was a huge, lush compound, and way off in the back was an art room filled with all kinds of paints, brushes, and paper. There was no one else in that room so I felt free to just try and not have someone next to me working on a masterpiece. The first color I put on the paper created a burst of joy inside of me…a new door sprang open. I began illustrating the journals that I kept, bringing my feelings to a new perspective.

I was teaching in China at the time and when I returned to school I found someone to teach me drawing. I still have my sketchbook and look back at my first drawings and the progression over time amazes me.

Now that I am retired I have taken oil classes for a year and while I love working with that medium, the clean-up turns me off.  A few weeks ago I found a woman with a soft gentle soul and I am trying watercolor lessons with great hopes.

Becky Ripley: Here are a few ideas about what it's too late for:

Joyce Wycoff: It’s too late for me to be an opera singer, but it’s not too late to sing. (BTW, the dream of being an opera singer passed swiftly when I discovered folk music and rock and roll.)

It’s too late for me to build a great business, but it’s not too late to invest in business or help others build their businesses.

It's too late for Is it really too late to write a best selling book ... or is it? Are any of these too late or do I just no longer have the motivation for them? What one piece of these dreams can I hold onto?

We would love to hear your comments and thoughts about your dreams you may have packed away thinking it's too late.

Labels: Becky Ripley, been there voices, is it ever too late?, Joyce Wycoff, Susan Larson