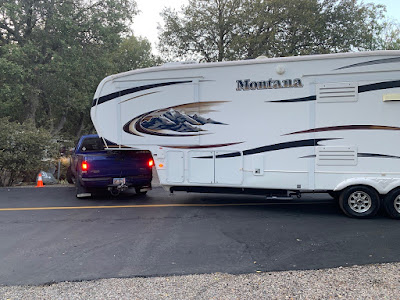 Some of you may be thinking about living in an RV or heading out for the open road. I highly endorse the idea, with a few caveats about the learning curve that, for me, is part of this adventure.

I lived for 7 months in what was an RV bubble and thought I had a sense of what I was doing when I decided to live full-time in an RV. Now I think of that decision as being somewhat like deciding to eat only what you can grow yourself. Sounds wholesome, self-reliant, and fun ... until hunger sets in.

Perhaps the best way to share my thoughts is to describe the past three days.

Weather will be a constant companion whether you’re on the road or parked. Several days ago, I noticed that we were in for a week of wind, rain, and freezing temperatures; so I started making plans.
Two days ago, I decided to stabilize the RV with a tripod stabilizer and to wrap my water hose to prevent freezing. Buying and installing the stabilizer was easy. Wrapping my 100’ of hose was simple but time consuming. Two jobs well done and satisfying.

Yesterday, since the night temps were touching freezing, I started thinking about my furnace and the propane tanks that keep the warm air flowing. A friend suggested they might need insulating. Sounded reasonable, so I was off to YouTube (the repository for multiple answers to all questions, some actually helpful.)

After several videos by guys who all want to be my new best friend, the answer to why you should NOT insulate propane tanks began to make sense … boils down to: they work better when full and insulation hinders the evaporation (you have to watch the videos yourself if you want to know why that’s important.) Anyway, scratch “insulate the propane tanks” off my growing to do list.

However, the idea that they work better when full was troublesome. Are my tanks full? Who knows? Back to YouTube. Apparently, “How full is my propane tank?” is one of the mysteries of the Universe. Some guys thump ‘em, some pour hot water down the side and wait for a frost line, some buy a profusion of gauges which half the reviewers swear didn’t work.

I’ve been here six weeks and had to assume that it was likely that my tank was empty. Well, that and the fact that my furnace didn’t seem to do much other than keep the frost out of the air. So I’m off to take my tank to the park office where they fill them … after watching several videos about just how to take them out of their compartments, of course.

I have a “split-bottle” system with an “automatic changeover.” That's good because the law of propane tanks is that they run out at 2 am. (Of course, none of that was spelled out in the large stack of manuals I inherited with this RV.) 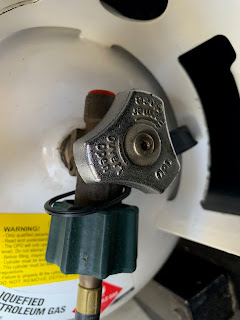 As I looked into the cabinets that held the bottles, I saw more questions than answers. (Do remember that propane is dangerous … one wrong move and I could blow up half the county. My imagination painted graphic pictures.)

Finally, in something of a state of panic, I took photos of both tanks and their respective valves, (this is not what I want to take pictures of), then photoshopped a page of appropriate photos and was headed out to the RV store 20 miles away, when a neighbor and his wife pulled into their space.

I almost gave him time to get out of his car before I was groveling at his feet, begging him to help me figure out what to do. Being a nice man, he gently took me over to my unit and revealed the mysterious workings of propane tanks.

I felt saved until we took the first one out of its cabinet. Definitely empty, but the sucker was anything but light. My neighbor decided the other one was probably empty also and took it out. It still had some propane left, but I took both to the office to be filled.

My neighbor made me promise I’d let him help me reload them when I got back. I demurred for half a second; I am trying to be self-reliant.

It didn’t take long when I picked up the full-bottles to realize there was definitely an issue. Research has since revealed that a 30# tank weighs 55#. (It’s a little ridiculous to ask Google how much a 30# tank weighs. Like who’s buried in Grant’s Tomb? only in this case it would have been Grant and all the little Grants.)

However, with my neighbor doing all the heavy lifting, the full tanks were soon in place and the furnace ran at a near-toasty level. Another check mark on my to do list.

Today began well: nothing froze, water is still running. I knew I needed a system for loading and unloading the propane tanks and that made me wonder how long they would last. Google proceeded to tell me that a full 30# propane tank should keep a furnace running consistently for 25 hours. Since I have two tanks, I had 50 hours of furnace time … however, I had just used up 12 hours in one night!

Drat! That’s not going to work for a 3-month winter. Small space heaters work well in small spaces though, so I was just getting ready to head to the city to buy another space heater when I decided to dump the tanks: black water and gray water.

There’s more to the story, more Googling, more YouTubing, more crying on a friend’s shoulder, and one trip to the hardware store to buy tools that I don’t know how to use to try to fix something I can’t see.

Now, I sit here writing in a frosty room because I’m not about to use that precious propane, hoping I never have to go to the bathroom again, and wondering if I will ever feel competent and truly self-reliant.

However, on the way to the hardware store, I saw buffalo and a barn quilt. That almost makes up for all of these challenges. Here are the buffalo. Quilt next time when I figure out how to pull off the narrow, two-lane road. 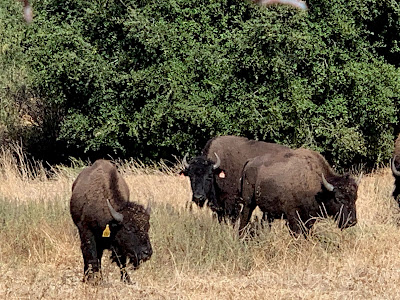