The Eagle: in Nevada and in poetry 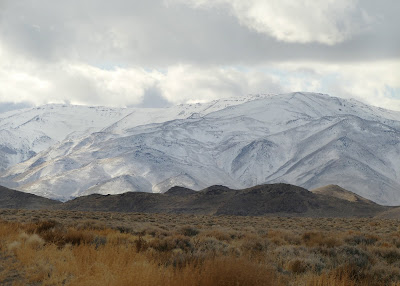 Yesterday was one of those everything days as we explored the Nevada outback (more elegantly known as the Great Basin) … cold with a few peeks of sunshine, occasional bits of tiny snowballs, and fierce, stinging winds that whipped around canyon walls.
It's an empty world … until you look. In a cavity of a high rock cliff, we were stunned by a golden eagle's nest. 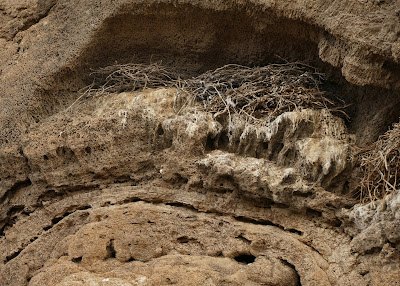 On the floor far below, I spot the blue belly of a ring-tailed lizard who had left this world for another. An opalized seam of white cracks the towering rock face from tip to floor, scattering crystals this way and that in washes of rocks luring hungry eyes. Tiny white jaw bones with teeth still embedded and fossilized rocks hint of the past ... one that stretches far back in time. 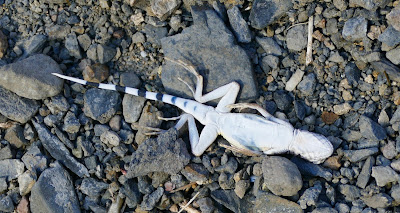 It's a silent world that whispers its secrets only to the wind. If you want to know them, you have to stand close, listen, and imagine.
If I were an eagle, I’d want to sit on that high cliff with my equivalent of a cup of coffee and contemplate the world below me while warming the generation to come. I’d be loath to leave the secure nest I had built stick by stick. Eventually though, a scurry on the desert floor would rouse me into action and I would unfold my giant wings and "fall like a thunderbolt" toward my next meal.

This short poem has always been a favorite. Now I realize how incredibly accurate his words are.

By Alfred, Lord Tennyson
He clasps the crag with crooked hands;
Close to the sun in lonely lands,
Ring'd with the azure world, he stands.

The wrinkled sea beneath him crawls;
He watches from his mountain walls,
And like a thunderbolt he falls.
Thank you Annie and Don Tennyson for an incredible day.
Posted by Joyce Wycoff at 9:42 AM