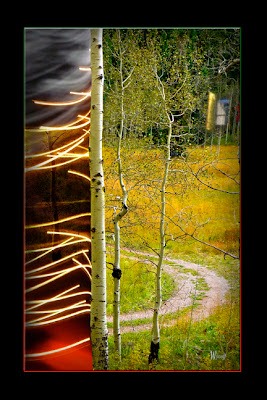 Life turns a corner and you're in a new land and the moment before is gone.  Only the new present remains calling for awareness, engagement, respect.

Sometimes we recognize those turns the moment we make them … other times they slip in under our gaze, unnoticed and unseen until later when we wonder what happened and trace the new reality back to a word said at the right (or wrong) time, a decision to walk a new direction, or a choice as simple as wearing a bright color.  Sometimes they add up like grains of sand on a pile until one grain lands and everything shifts and reforms itself.

It's a process that continually fascinates me as I watch life shift … sometimes dramatically after a period of seemingly little change.  It makes me realize that everything is in constant flux even when it seems the same.  And, every moment deserves appreciation and notice … for in the next instance it could be ... will be ... gone.

About this image  Life Turns

This image came as I contemplated the ever-shifting, ever-changing nature of life. Starting with a road that wound through an aspen forest near Maroon Bells in Colorado which then called in an experimental image of lights on a ship cruising to Mexico.  These images seem to recognize their own connections that i can't see consciously but when I let them play, they seem to find their own way.
Posted by Joyce Wycoff at 10:00 AM