Recently I made a decision to uproot my life in order to answer a question: What would it feel like to feel connected to nature?

It’s a question that has been emerging for some time. Several years ago, in a values exercise with a friend, “connection” was in my top three values, and, more recently, the tagline for my art appeared as “connecting through art.”

Connection may be what I’ve been looking for my entire life. Strange things seem to be churning my decisions, pulling me in directions which seem to have no logical rhyme or reason, making me feel somewhat like I’m just along for the ride, paying the bills and packing the boxes.
You know those fall wind spirits that swirl leaves and dust like a mini-tornado? That’s a bit like what’s going on in my head. I catch bits and pieces … wildflowers and nature, California and connection ... but can’t seem to grasp the whole. I know I need time in nature, slow time to observe, to invite connection, to feel myself as part of the universal whole, part of nature. I have the sense that this is going to take a new way of being in the world. Thus chopping and tossing my life like Sunday fruit salad.
I’m not sure I can do any of this. I’m a product of my first 74 years and the dominant culture that considers the earth a supply cabinet of resources. Do I even know how to begin to open up to a different way of knowing, learning, and being?
Today was a baby step that tells me I have far to go. However, it was a joyfully delightful day so that must count for something.
I’ve always been something of a road warrior … point A to point B with no stops other than the mandatory requirements of body and car. My husband slowed me down a lot since he was constitutionally unable to pass a historical marker, a fruit stand, or a small town museum. Now, my camera slows me down, although I still tend to have that antsy “gotta get there” feeling if I dawdle too long.
When I decided to sell my house and establish two RVs at different ends of California in order to spend a year (at least) exploring California, photographing wildflowers, and reconnecting with nature (on the assumption that I was once connected.), I knew more than geography needed to change. So, I developed the idea of having a weekly “Wander and Wonder” date … based loosely on Julia Cameron’s artist date concept.
Yesterday was the trial run as I left social media and projects behind with only a loose idea of going to Page Meadow, somewhere near Lake Tahoe where a member of a Facebook group had taken a lovely picture of a Toad Lily. When my GPS didn’t want to find Page Meadow, I stopped in a shady spot next to one of the many Emigrant Trail signs I would see often during the day. I realized I wasn’t particularly concerned with where I was going. It was a glorious, blue sky day and I was happy taking pictures and enjoying the beauty around me, delighted that I could finally recognize the difference between a ponderosa pine and a Jeffrey. 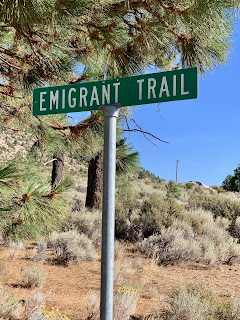 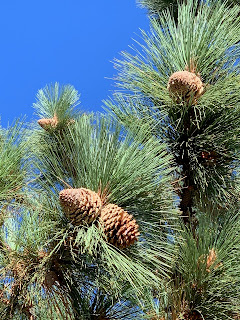 When I saw a sign for Silver Lake, that seemed like a fine destinaton, so I continued up the hill, stopping frequently for photos that just had to be taken. The first fall colors were spotting the hillsides and, as usual, Aspen gold made my heart flutter. 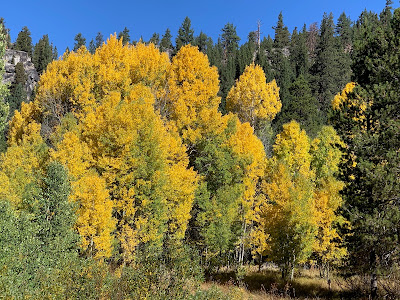 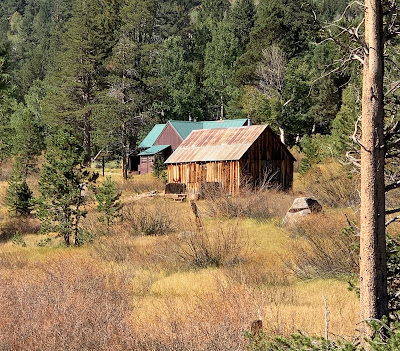 During the trip, I was listening to Bioneers' podcasts and heard a speaker say:

The Zen Master Thích Nhất Hạnh was asked what we need to do to save our world and he replied: “What we most need to do is to hear within us the sound of the earth crying.”

When I stopped for lunch at Silver Lake though, what I heard was more like purring as I gazed across the peaceful lake surrounded by granite mountains and pines. 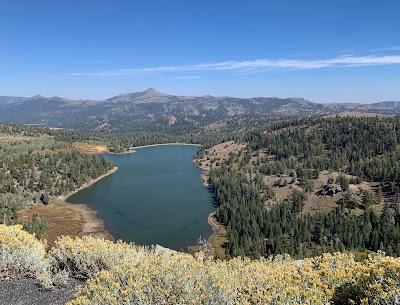 Red Lake Vista Point
After lunch, I continued to Lake Tahoe's Inspiration Point on Emerald Bay. This has to be one of the world’s most stunning places and the signage offered nuggets about the area and history. One of them told about the early days when people in their Model Ts and Oldsmobiles would drive up the makeshift road to see the incredible colors of the water. I think it particularly impressed me because I had been gripping the steering wheel and trying not to look over the edge as I drove up the perfectly paved but narrow road. 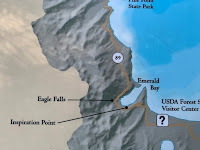 The Lake Tahoe area is one of those places that has been overloved. The beauty is breathtaking, but even on this off-season Tuesday, the parking lot at Inspiration Point was jammed. I felt more touristy than inspired or connected.
The last stop of the day was the Spooner Lake Trailhead day use area where I lost a battle to a food bee. They must have the most acute sense of smell in the world. No sooner had I opened the snack baggie of deli turkey than they were all over it and me. One of them must have been starving and was not about to be shooed away or take no for an answer. He won. When he stung me, he and the food went flying and he’s probably still there pigging out.
Each of the picnic tables was covered with graphic images that looked a bit like place mats. Each told a story about the area and its history, reminding me that Chinese immigrants who came to the US were not permitted to own mines or bring their families to the US or marry a non-Chinese person. They were forced into service roles such as railroad laborers, flume builders, or camp cooks. 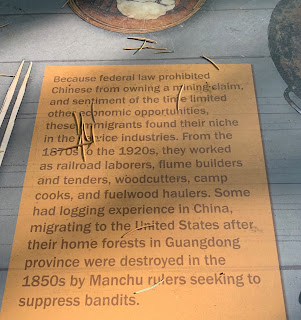 In these political days that often baffle me, I wondered about the process that resulted in a body of legislators three thousand miles away deciding who could own what and who could marry whom based on where they came from or the color of their skin. And then I remembered that it’s all about money.
Even in my bee-wounded condition, I was able to wander though the Aspens looking for carvings by the Basque shepherds. Most, though, were the marks of young lovers and I wondered how many of them were still together, or what their lives were like today.
All in all it was a pretty remarkable day that I thoroughly enjoyed. However, as I drove home reviewing the day, it seemed like the ratio of gas burning to nature observation was out of whack. It felt like a tourist day rather than a day of connecting with nature … other than the bee, that is. We definitely connected.
Thoughts about my next Wander and Wonder date: slow down. Maybe include time for sitting in meditation, sketching or doing watercolors, limiting the day to one or two places.
A few “rules of the road” appeared throughout the day:
Posted by Joyce Wycoff at 6:46 AM