Love Letter to My Life #25: The Frank Sinatra school of language learning 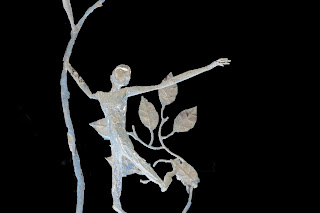 I am learning Spanish … again! It's becoming something of a dance.  I’ve had three significant failures in this endeavor and an uncountable number of lessor failures.

Este tiempo es diferente. This time is different. Why? I’ve found a way to do it my way … and … I’ve taken away the need to actually use it. .... screech ... halt! What? Why learn a language if you're not going to speak it?

It didn't start out that way.  My journey began when I wanted to speak to people while on vacation in Mexico; later that broadened and became the desire to speak to my neighbors and to the artisans who were featured at the  Feria del Maestros del Arte in Chapala. I had a purpose and a way to judge success ... and, most often, failure.

Of course, I would still like to speak Spanish, and I live in a mixed neighborhood where … assuming we ever get past COVID-19 and can actually have conversations with our neighbors … I would be able to use the language. However, I’m finding now that “success” is not dependent on my ability to have conversations ... a bit surprising since that seems to be the only definition of success currently used.

How does that make sense? How can I feel like a success as a language learner when I still can’t speak the language? I like Spanish and  I like to read so the ability to read Spanish would be one success indicator. I also like the sounds of Spanish so being able to understand spoken Spanish, songs, and shows would be another.

The one ability that has shown up recently surprises me. Turns out that I’m starting to be able to think in the language … and my thinking has a different quality when it’s in Spanish. I tend to think fast, skim a lot, and skip to the bottom line. Reading and writing in Spanish slows me down and somehow creates a thought process that feels deeper as I explore the nuances of word meanings.

Over the past three years, I’ve put in a significant amount of time studying Spanish and have clawed my way onto the lowest rungs of intermediate Spanish. When I left Mexico, I assumed there was no point continuing to study the language since I’d probably never use it. However, when I arrived in Reno, I started hearing Spanish and listening for it. I could feel myself leaning into it, yearning to know more.

A couple of synchronicities happened and suddenly I was pulled back into the vortex of learning. However, this time, I was determined to do it my way. I gave myself permission to learn the language even if I didn’t speak it to anyone other than myself. (Aside: almost every language teacher says this is the WRONG way to do it.)  I realized if I wasn’t hitched to the star of spoken Spanish, I could learn any way I wanted to, and just enjoy it along the way.

While thinking about this learning journey, I remembered my history with photography. I bought my first camera when I was 18 and the next several decades were a frustrating blur of trying to become a good photographer … classes, better equipment, photography tours, books, clubs … everything I could think of … but the quality of my images seldom brought me joy. Plus the cost of film and development hindered my learning process.

Then came digital and my world broke open. Within the first six month of shooting digital, I learned more than I had in 30 years. The instant feedback and being freed from the cost structure of film set my creativity free. I wasn’t aware of how much I had progressed until several years ago when I went to Aspen to shoot the hot air balloon festival and the spectacular local scenery. (Maroon Bells is one of the most photographed places in the west.) For some reason, I wanted prints so I dropped off my camera card at a local print shop.

When I went to collect the prints, the manager of the store handed me the package and started talking about what a good eye I had. In over 30 years of photography, I had never before heard those words. I don’t think my eye changed, I think the instant feedback that comes with shooting digital taught my eye how to see and how to capture what caught my attention.

Suddenly, a light bulb went off: I needed instant feedback on my learning journey … but not the kind that comes in a “real” conversation. Think about it … when you’re chatting with a friend, how often does he stop you to let you know you’ve mispronounced a word or used it incorrectly? And, if she did, what did that do to your focus and the flow of the conversation?

It was in Google Translate that I found the instant feedback I needed. People will be quick to tell you how bad Google Translate is, but I’m here to tell you that, while it may not be perfect, it is a teacher with infinite patience. And, it depends on how you use it. If I want feedback on my Spanish, I have to make the first step … in Spanish. From a learning perspective, it’s not particularly helpful to just put some English into  GT and then use whatever Spanish comes out.  It makes a weak impression on your memory.

For example, in the simple sentence at the beginning of this post, I wanted to say “this time is different.” As you can see from the Google Translate image, the English came out the way I wanted. Yay, me! I was right and a tiny endorphin rush streams through my body.  However, that's just Step One.

Step two is to copy the English translation and move it to left side and let it translate from English to Spanish. It comes back: “Esta vez es diferente.” While only one word is different, it’s a learning moment. The word “vez” means time, but more of an occasion rather than clock time.

Not surprisingly at this stage of my journey, step two is seldom perfect. However, the process let's me tweak and learn, learn and tweak until the sentence meets the objective of meaning what I want to say and GT agreeing that it says the same thing in Spanish.

Using this process, I began writing 20 sentences a day about my life and using new words that I put on tiny cards. These aren’t flashcards because there is no English, no translation on them. If I forget the meaning. I have to look them up again.  However, they stimulate me to write more complex sentences while still trying to stay relevant with my life and the world around me. That additional stimulus pushes me into new thinking ... not only about Spanish but about my life.

This is a slow process, usually taking about 2 hours to write the 20 sentences, but in the past several days, I've discovered a side benefit: because it takes longer to think about what I want to say and how to say it in Spanish, my thoughts seem to go deeper and get clearer. And, as I tweak the sentences to get the Spanish and the English aligned, I’m giving myself more time to think through different aspects of whatever it is I’m thinking about.

Every time a tweak is required, its a learning moment. My most frequent one right now is forgetting to use the personal "a." Without the Google Two Step, I wouldn't have that constant ... and gentle ... reminder. Someday, because of this process, I know that the personal "a" will become second nature. 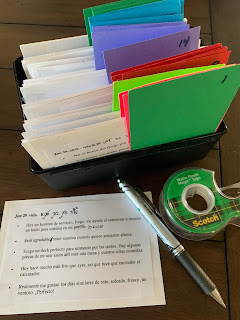 Spaced repetition and reading out loud

The rest of the process helps to embed the sentences and the sounds more deeply in my memory. Once I have the sentences formed, I print them out and tape them to cards: 5 sentences to each side of two 4x6 cards. The cards are dated for review the next day, 3 days later, 6 days later and then 13 days later, a process called spaced repetition which every memory and learning expert seems to agree is a critical part of the process.

Before I put the cards in a box with date separators, I read each sentence out loud. Sometimes when review of a card from a previous day, I've forgotten what I was trying to say or the meaning of a word. That forces me to rethink the sentence or look the word up again. Reading out loud deepens the memory impression and trains my ears and my tongue.

The bottom line is that rather than thinking about my learning time as a chore, it’s also a time for contemplation and reflection. It’s a gift I’m giving myself ... and it's fun.

I've now written over 400 sentences and can already feel my growing ability to express myself in this new language. I'm beginning to feel successful, erasing years of feeling like a failure. One day this success may show up in the world, in conversations with Spanish speakers ... or not. Either way, I'm grateful for this journey.