It Happened in Kingman, Arizona

Kingman,  the last Arizona dot going west on I-40, is an unlikely place for almost everything … an oil slick forest of billboards and fast food sirens place … a quick-stop for gas without a backward glance place … a stay here only if you missed Flagstaff place … an Andy Divine … who? ... lived here and now has a street named after him place … never an everything-changed-here place. But, there it was, the fever-broke here place, in a Motel 6 room no less, on one of those throw-away days between Christmas and New Years.

In an alternative universe I would have swung south out of Flagstaff toward the energy vortex of Sedona, nestled into a bungalow among the art-infested red hills, aligned my chakras with the winter solstice and sat in meditation on the Devil’s Arch until the four directions merged  into a deep cellular peace in a Hollywood-worthy moment. At the very least there would have been photos. But, who takes photos of a Motel 6 room in Kingman, Arizona?

If I had known then what I know now, I would have made that left turn off of I-40 onto I-17 headed south to Sedona and prepared myself for the change to come. But, what did I know? How could I have known that one night in a Motel 6 bed would wipe away the confused torment of the previous months and leave me in the welcome but recently unusual state of clarity. Perhaps, I should call Tom Bodett of the “We’ll leave the lights on” fame and suggest a new marketing strategy … Motel 6 … home of instant enlightenment.

But it wasn’t enlightenment exactly that happened that night in that comfy Motel 6 bed … it was much more of an evaporation, a disappearance of what was. Nothing new was revealed, no thunder rolled, no clouds parted, no voices spoke words of wisdom into my ear. It wasn’t what was suddenly there; it was what was suddenly gone: the conflict, the doubt, the fear.

More importantly, what was gone was the thought that I had to do something, take charge, make a decision, choose. What was also gone was the illusion that I was … that I should be or even could be … the controller of my destiny. Heresy! My entire life is a paean to self-determination; my theme song straight from “Invictus” … I am the master of my fate, I am the captain of my soul. Oh how I wish … or, now, perhaps more correctly, wished.

Suddenly my whole belief system blew out the window into that not-quite desert, rainbow dawn morning as I drove out of Kingman, Arizona, headed toward the unknown, knowing I had no control over what I would find waiting for me when I reached the bright Pacific waters but feeling, for the first time in many months, completely at peace with whatever it might be.

This is not the ending of the story, probably not much more than the beginning … or the beginning of the beginning but it’s all there is right now … a new awareness, a new feeling of peace … perhaps a fragile candle flame that could wick out  in a slight breeze … or perhaps the beginning a something bigger and stronger. One never knows. One can only wait to see what lies in store for us while taking one small step at a time toward the truth of who we are, letting that way-too-subtle whisper of the Universe guide our steps, accepting every twist and turn of the path for its perfection.

It makes for a rather comic, cosmic headline:  … kid from Kansas, with all the great religions, gurus and masters to choose from, finds peace in a Motel 6 room in Kingman, Arizona. As Paul Harvey would say: stay tuned for “the rest of the story."

Postscript: Facebook added another dimension to this story when the image below was posted this morning. I now know that what happened on 12/27/2014 in that Motel 6 room was that infatuation moved over and love moved in. Thanks to the anonymous author. 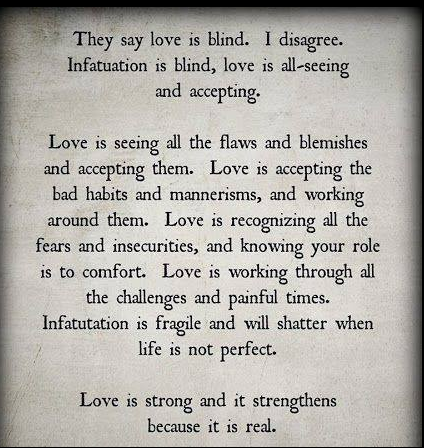 It seems only fair to put a PS on this note ... three and a half years later. What this post skirted was that there was a guy involved ... of course! Commitments had been made to spend our lives together but confusing clouds roiled around our universes. I was headed full out into our future when I stopped in Kingman and allowed doubt ... and clarity ... a space to play.  Five days after writing this post, clarity showed up in my body. I just knew I was on the wrong path. I tried to capture the original spark, but all our talkings further clarified the chasm between us and we started the New Year headed in different directions.

Thank you, Kingman.
Posted by Joyce Wycoff at 5:15 AM