Every year I post this poem written to celebrate Martin Luther King, Jr.'s  birthday and honor all that he gave us and to also honor Rosa Parks and all the brave people who gave so much to the fight for equality.
In these trying times we are still trying to live up to his words and actions. Over the next few days, we may be tested; we have to stay strong and follow leaders who believe in equality and justice for all. We can't be too tired to stand up for the ideals of our country.
jw 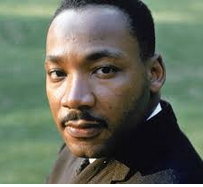 Twenty-six he was when destiny crooked its finger,
beckoning the still-green minister-scholar into the world.
Forty-two she was when she pounded on the door
Theoretically opened ninety-four years before.

It was the first of December, 1955, when history wove
Their fates together into a multi-colored tapestry of change.
“Tired,” she said, “Bone tired. Tired of giving up.
Tired of giving in,” she said and sat in the front of the bus.

Montgomery, Alabama, shivered as the temperature rose.
The old ways could be heard keening long into the night
As 42,000 people left the buses to stand by Rosa’s side.
381 days they walked: nannies, maids, carpenters, all.

Two hundred years of anger rose up to shatter the silence
And from this deafening roar came a molasses-rich voice
Spinning a song of hope with a melody of peace and love.
“I have a dream,” boomed and echoed across the land.

The young minister-leader painted a picture of a life
without color lines, a world without violence.
His voice lifted the dream: Richmond, Little Rock,
Dallas opened their buses, took down their signs.

“Our lives begin to end the day we become silent
about things that matter," he said, never silent again.
He took our hands and led us step-by-step onto a new path,
Brothers and sisters connected by heart rather than skin.

“Always avoid violence,” he said.
“If you succumb to the temptation …
unborn generations will be the recipients
of a long and desolate night of bitterness,
and your chief legacy to the future will be an
endless reign of meaningless chaos."

Thirty nine he was when one man with a gun silenced the voice,
But not the words …those four words branded into our brains:
“I have a dream …,” saffron-rich messengers left behind to
Carry forward the dream of a color-blind world of hope and peace.