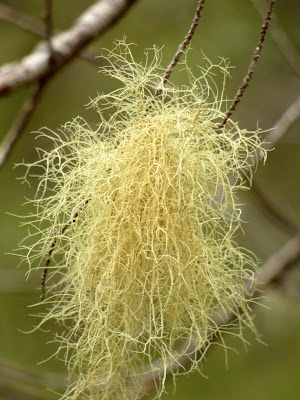 Up, and to the office, where busy all the morning, and then at noon to the ’Change with Mr. Hater, and there he and I to a tavern to meet Captain Minors, which we did, and dined; and there happened to be Mr. Prichard, a ropemaker of his acquaintance, and whom I know also, and did once mistake for a fiddler, which sung well, and I asked him for such a song that I had heard him sing, and after dinner did fall to discourse about the business of the old contract between the King and the East India Company for the ships of the King that went thither, and about this did beat my brains all the afternoon, and then home and made an end of the accounts to my great content, and so late home tired and my eyes sore, to supper and to bed.

which to be
a ropemaker or a sun

the old East India Company
or the rains

no end of accounts
to tire my yes

Posted by Joyce Wycoff at 5:00 AM No comments: 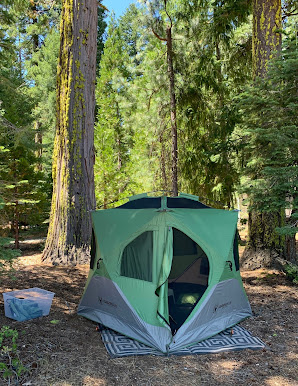 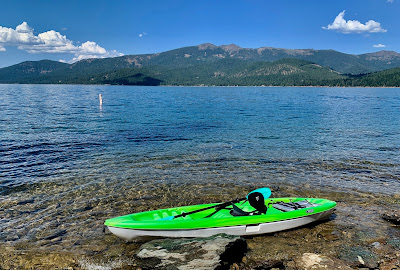 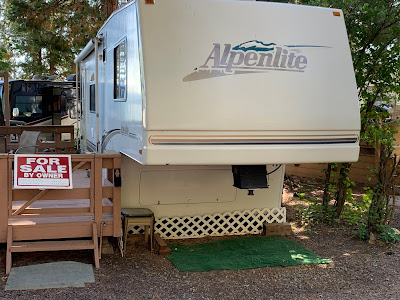 I never tire of taking photos of flowers. For some reason though, I’ve long neglected the process of understanding them. Like all living things, they have organized themselves to survive and reproduce. Beauty is their strategy for success and their anatomy is carefully designed to interact with their environment. I truly appreciate this flower anatomy lesson found at ProFlowers. 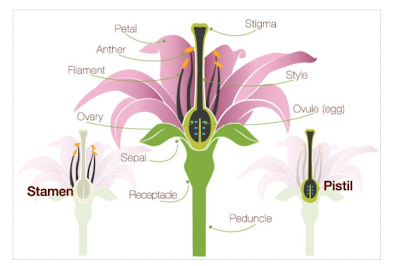 Petals are what give a flower its unique shape, and are often brightly colored to attract insects and critters, which unwittingly aid in the fertilization of ovules through pollination.

Sepals are the small, leaf-like parts growing at the base of the petals. They serve to protect the flower before it blossoms.

Peduncle refers to the stem or stalk of a flower.

Receptacle is the thickened part at the bottom of the flower which holds its major organs. 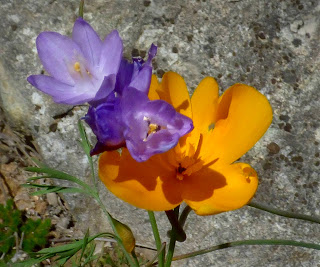 Pistil is the female organ of the flower. It consists of four major parts:

1.    Stigma – The head of the pistil. The stigma receives pollen, which will begin the process of fertilization.
2.    Style – This is the name for the stalk of the pistil. When pollen reaches the stigma, it begins to grow a tube through the style called a pollen tube, which will eventually reach the ovary. The style therefore acts as a buffer against pollen contamination, since only compatible pollen is able to grow a pollen tube.
3.    Ovary – The base of the pistil. This organ holds the ovules awaiting fertilization.
4.    Ovules – These are the flower’s eggs, located inside the ovary. Upon fertilization by pollen, they will eventually grow into a seed. In fruit plants, pollen will not only spark the growth of a seed, but a surrounding fruit as well.
Stamen is the male organ of the flower, consisting of two major parts:
1.    Anther – The head of the stamen. The anther is responsible for the production of pollen, which will hopefully be transported to the pistil by animals or insects, such as bees. This is a crucial part of the reproduction of the plant.
2.    Filament – This is the stalk that holds the anther and attaches it to the flower.

Making More Flowers
It’s amazing for nature to provide a flower with the ability to reproduce without the need for a mate, but not all of them do!

Some flowers have only male or female organs, and require a separate flower of the opposite gender to reproduce. We call these Imperfect Flowers. Perfect Flowers, on the other hand, have both a stamen and a pistil, and are able to reproduce on their own.

Posted by Joyce Wycoff at 7:59 AM No comments: