Santa Virus ... it's not just lumps of coal 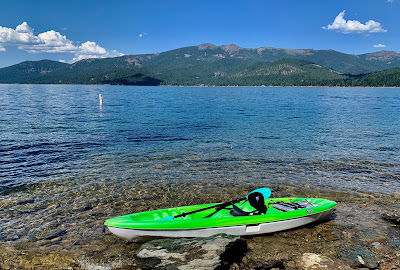 It is humbling to be so grateful to something that has caused so many to lose so much.
Yet, here I sit on my quiet deck looking out over Lake Almanor in Northern California as a gentle breeze cools the late afternoon air. For me not to be grateful for this gift would be an affront to life. I am reasonably sure I wouldn’t be sitting here if it weren’t for the pandemic that has stomped across the planet tossing plans and expectations into the air as if they were merely bits of plastic in the world’s largest Legos set.
Most of us could tell a story, or many, of where we were, what we were planning to do, when we realized that we were in the midst of something serious, something unlike we had seen before. Dream trips were suddenly cancelled; children were home all day, every day; jobs were lost, income streams halted, purpose derailed, and identity masked; loved ones were hospitalized with no way of holding their hands or offering them comfort. A microscopic lion blasted its roar into every corner of the Earth.
In the first week of March, I returned to Reno from visiting a friend in Florida. My first impulse was to go see my kids but then I realized I had no idea what I might have picked up there or on the cross-country flight. Thus began a self-quarantine I thought would last only 14 days while I tried to figure out what all of this meant. I had returned from two years in Mexico a few months earlier and had just purchased my permanent home. I was ready to start reaching out, getting involved, sketching the shape of the “rest of my life.” I still knew almost no one in Reno and now the mechanisms for meeting people were starting to slam shut. What now, fair child? 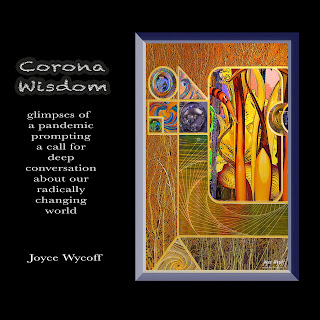 My curiosity about this novel virus plunged me into the deep end of the sea of information that was rising rapidly. It was something I couldn’t stop watching as the numbers exploded and the human drama of greed and generosity took the place of the movies that were no longer “coming soon.” A creeping form of insanity crept across the landscape with a bit of cloth as the line in the sand that divided the world. It was a story unfolding and we still have no idea how it will end.
For three months I wrote and made art about the global phenomenon that had shut down cities, wreaked havoc with economies, and killed hundreds of thousands of people. And then I stopped, called it done, printed the 130 page book and wondered what was next.
The world was still topsy-turvy and there was no place to go. The US had done such a horrible job of flattening the curve that no one wanted us, our magical American dollars, or the contagion that blossomed in our wake of ignoring the obvious and arrogantly parading our rights as a free country to do whatever we wanted regardless of the consequences to others.
I dithered, generated a slew of new ideas, none of which stuck, and, in the meantime, summer arrived in Reno like an oven with its own wind tunnel. I was locked down by a virus and locked in by heat and wind. I needed fresh air and water. When I had returned from Mexico, I bought a kayak and a nifty lift that allowed me to single-handedly put it on and take it off of my car. A friend coached me through the buying of an easy-up tent and the necessary camping equipment.  I had a plan. God’s laugh was only a whisper ignored.
Nevada is an amazing state and I’ve fallen in love with it. However, it’s a bit like having a lover wrapped in barbed wire; it can be a bit harsh. However, I was determined to explore my new state, so off I went to Washoe Lake for my shake-down cruise and two or three nights of camping. I found a spot, set up my tent and all my stuff and headed for the lake. It was glorious … a little breezy and the water a little murky … but I was outside and on the water.
Back in camp, the breeze grew stronger, the air hotter, and white caps danced across the lake. Definitely not a day for an evening paddle. As I sat at my cute, red and white checkered picnic table getting hotter and dustier, I allowed my expectations and my inner weather wuss to have a tantrum and then slowly repacked all my camping gear and went home. Defeated.
There is a certain edge to defeat at age almost-75. That little voice I had banished so long ago has tiptoed back into my head. “Maybe you’re just too old,” he said. “You don’t know what you’re doing. You’re all by yourself … you could get hurt. It’s time to act your age.” That night, as I slipped into my comfy bed, I thought he might be right. I should just sell my camping gear and my kayak and settle into my little-old-ladyness.
One of the things I like best about myself is that when morning comes, the person who leaps out of bed (well almost these days) is ageless and positively anxious to start a new day, learn something new, find beauty, create art or words or almost anything interesting. Morning-me is a doer with no limits, enchanted by everything she sees through her rose-colored glasses.
For the next couple of weeks, I looked for ways to deal with the heat and the wind: walking early in the morning, putting a sunshade on my deck, focusing on finding a project that excited me. Somewhere during that time, a memory from decades before returned, creating an OMG reaction.
Many years ago my first husband and I had spent a night camping at Lake Almanor and I remembered how beautiful it was. Now it dawned on me that it was only a two-hour drive away, so the next morning, I jumped into the car and drove to the lake thinking it might be a place to camp and kayak. On the way, I started thinking that if I could find a place to park an RV, I could have a place to go in the summer, a place for kayaking, swimming, walking among big trees. All those thoughts were clouded by the issues of moving a trailer or 5th wheel, storing it in the winter, spending money I might need later, and dozens of worries about this and that.
The lake was everything I remembered and I checked out a few spots for an RV with little luck. As I drove around the lake, the magnitude of what I wanted seemed just too daunting. And, just as I was thinking myself crazy for even thinking about this, I turned into a small RV park … Vagabond Resort … and saw a trailer with a deck … with a For Sale sign on it. It had a beautiful lake view and I assumed it would be entirely beyond my budget … especially since I had no “budget” for such an extravagance. However, I took a picture of the sign and the phone numbers. 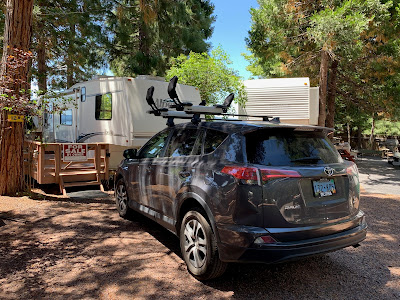 On my way out of the park, I found another trailer for sale, no deck, no view, cramped location. I called the number and exchanged photos and information with the owner, only to discover it was definitely out of my price range. I tried the other numbers on the place I really liked but no one called me back. Conclusion: nice idea but obviously wasn’t going to happen.
The next morning, before reality set in, I tried the numbers again. Bob answered and I discovered it was within shouting distance of affordable. My heart leaped and reminded me that there are no certainties in life, a microscopic predator was actively proving that point. One thing led to another and three days later, we had a deal and here I am now in my dream location, kayaking when I want, swimming in lovely clear water, surrounded by friendly people, and feeling an overwhelming sense of gratitude.
I know this virus has created enormous problems for the world, however, I believe it has also offered us a chance to stop and think about what is truly precious in our lives. Buried deep within obstacles are unexpected gifts. May you find ways to give yourself gifts that will make your heart sing during this strange time.
QUESTION: What were you planning to do when corona interrupted everything?