Artifact Memories: powerful indicators of who we are. 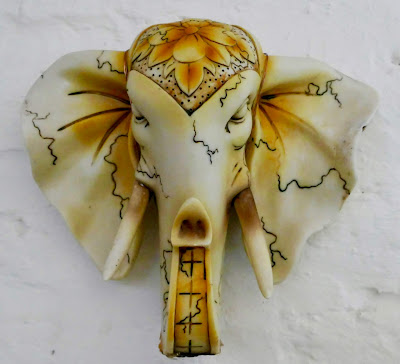 A few years ago, I lived in a lovely mobile home park on the central California coast. My neighbor was a certifiably crazy woman.

At first, she thought I was cool because I was an artist, and she would bring me broken glass for my mosaic work. I just thought she was a little odd, so when she started asking for small bits of money “for medicine,” I gave it to her. When I found out her medicine was cigarettes, I said “no” and all hell broke loose. She started writing me long, rambling notes about how awful I was … in pretty graphic language. Then, a few weeks would go by and I was in her good graces again, generally because she wanted money. It was normally only about $10 and she generally paid it back, but her requests escalated and, again, I had to start saying “no."

She had three small dachshunds that she would leave outside for hours at a time and they barked constantly to the point where I couldn’t peacefully sit on my deck. When I asked her to not leave them outside barking, she went off again. More letters. After I was there long enough, I learned that this was her pattern with other residents and the park administration so I just tried to avoid her.

However, the point of this story is that at some point during our up moments, she gave me a dusty box of bits and pieces that included a broken elephant head. I don’t know why, but it called to me so I rescued it from the box. When I moved and did the normal downsizing, it wound up going with me. As the move to México approached requiring a drastic downsizing of all non-essentials, somehow it came, too.

A conversation with a friend made me wonder why. Pat and I talk every week and when she mentioned that she had a doll on her desk that had been there for at least 30 years ... as long as they had been in their house ... I was surprised. She is one of the most organized people I know, and not the type to have an old doll on her desk. She told me the story of having that doll since she was 16 when she was corresponding with a soldier in Vietnam. She had met him through a pen pal program and he had sent it to her. It started us both thinking about things that hold memories for us.

As we talked, it was clear that Pat's attachment to that doll related to her feelings about the world and herself at that time. Even though it had no intrinsic value, it was a significant artifact of her life, representing that time of chaos when she reached out to a stranger and connected to the world in a new way. It revealed a piece of herself that she had discovered at that time, a piece she valued highly.

One of my most treasured guides, Jerry McNellis, talked to me often about the power of artifacts, tangible things that hold memories, stories, meaning, and a certain power beyond their actual physical essence. For Pat, that doll is a powerful artifact. For me, that decorated elephant head seems to be an artifact. But, of what? It’s not like I have fond memories of the woman who gave it to me, or even that place since a political disagreement ripped the park apart and, somehow, I wound up right in the middle of the hostilities.

There must be something about this elephant artifact that is calling me, something to learn or recognize that I don’t understand right now. One of the gifts of this stage of life is time to contemplate things like this, reflect on our lives, and begin to gather pieces into a mosaic of who we are.

I think it’s worth the effort to uncover the meaning of these powerful memory artifacts in our lives.
Questions to ask about the “stuff” or “treasures” that surround you.

Look around you for something you’ve had for a long time, something that isn’t a family photo or heirloom, and ask:
If the answers to those questions are “no,” you may be dealing with an artifact that holds memories for you that might be worth exploring.

Some time later the memories unravel
Pat and I talked again about my elephant, and she suggested it might have something to do with  the political turmoil I experienced in the mobile home park where I had lived. As often happens, memories started unraveling in the middle of the night.
When my neighbor gave me the box of broken bits that included the elephant, it was missing a tusk. I found the tusk in the bottom of the box and glued it back in place. Thinking it might be part of a future mosaic project, I stuck it in a wire bed frame which was part of a garden art installation. It stayed there until it came time to move away from the Central Coast.

I dearly loved living on the coast, but had recognized that it wasn’t financially viable in the long run. In spite of a massive downsizing, I retrieved the elephant from the bed frame, again thinking it was a mosaic potential. When I arrived in Grass Valley, there was a spot where I thought the elephant would fit, however, since it was broken, there was no way to hang it or even stand it up. I wound up wire wrapping it and including it in a wall arrangement of plates and other bright bits.
My place was small and I saw the elephant every day and it gradually became a “he” rather than an “it,” always making me smile. In the final downsizing before Mexico, he made the cut and came with me, but I still didn’t think much about him other than he was cute. However, lots of cute stuff was easily left behind.

When I think about him now, it feels like I rescued him, and that he is a survivor … just like I was a survivor of that difficult time in the park. I had thrown myself and my energies into a political situation where I became a target of anger and fear. I was maligned, attacked and lied about by people who didn’t know me. Even though I was also respected and embraced by the minority of residents who saw things my way, it was a tough time. But, I survived and I think it taught me that I, too, could be tough.

I think that’s why the elephant is still part of my life. We may be bunged up a bit, but we are survivors. He is my reminder that I am strong and I can deal with whatever comes my way. Not a bad gift from what appears to be a dime store trinket.

Invitation: if you have memory artifacts and would like to tell us about them, please leave a comment below.
Posted by Joyce Wycoff at 4:30 AM