I Stand Up for All Pieces of Peace 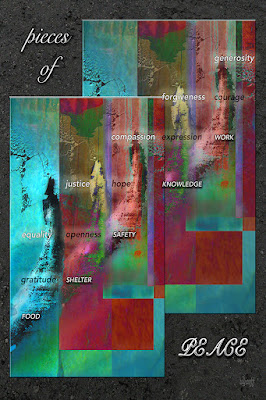 Like 62 million Americans, I woke up on November 9th stunned, flooded with fear for our country, fear for our future, fear for the millions of young people and children who were unable to vote for their own futures.

I also woke up chastened that I did not understand the depth of fear, anger and frustration that ran so deep that good people were willing to vote for change regardless of the shape that carried it into the voting booth. Michael Moore says we weren’t paying attention and I have to agree and accept my share of this disaster.

Like most of us, I want to know what to do now. Like most of us, I feel like I’m barreling through the five stages of grief: denial, anger, bargaining, depression and acceptance. It would be so easy to get stuck in any of the first four.

Recently, I heard someone talking about the bubble those of us called “baby boomers" grew up in and mistakenly thought was “normal.” We called it the “American Dream” and thought it was a contract with the future: we would work hard and the world would give us education, a comfortable home, a life-time job with health care benefits, and two-point-three wonderful kids.

It was a seductive bubble that made us blind to the people and events outside the golden dream. It made us fiercely protective of the bubble. And, as the bubble began to shrink and there wasn’t enough room for everyone, fear grew.

Years ago, under different circumstances, but similar pressures, the poet Langston Hughes asked, “What happens to a dream deferred?” His haunting poem, Harlem, ends with:
Maybe it just sags
like a heavy load.

Or does it explode?

November 9th, 2017, the world woke up to an explosion.
Things are different now. The pieces will never fit back together the way they were. As a matter of fact, they are still exploding. The Southern Poverty Law Center (SPLC) reports receiving over 200 hate-based complaints in the three days after the election. Anti-black, anti-immigrant and anti-Muslim incidents have spiked even more than after 9-11 reports an official from SPLC.

So, we come back to the question of what do we do? How do we continue the work to find peace in a world that seems hell-bent on exploding all semblance of peace.

Obviously, I have no big answer, but I have a small answer that will help me sleep at night. And, it comes from a program Pacifica Graduate Institute created called Pondering Peace in a World of Turmoil. In response to their call for submissions, I submitted a piece of art titled: Pieces of Peace that incorporated three levels of words.
Basic needs of all humans: food, shelter, safety, knowledge, work.
Individual values supporting peace: gratitude, openness, hope, expression, courage.
Interdependent values supporting peace: equality, justice, compassion, forgiveness, generosity.

My small answer is to stand up for all the Pieces of Peace.

One of the most basic of our needs - food - actually includes clean air, clean water and clean food.

There is a group of people standing up for those needs at a place called Standing Rock. They are standing up for all of us, trying to protect our water and our air as well as their sacred lands. Yet, they are being treated like criminals.

Tomorrow I will stand up for them as part of a nationwide demonstration of support. Thereafter, I will do the following:

Labels: Pieces of Peace., Stand Up for Standing Rock